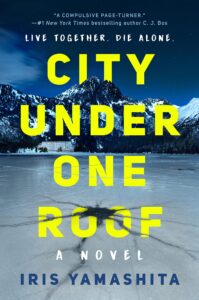 City Under One Roof

Iris Yamashita delivers delicious mystery and intrigue in her debut thriller, City Under One Roof.

The discovery of a severed hand and foot that has washed up on the shore of the small town of Point Mettier, Alaska, draws detective Cara Kennedy to town to investigate further. She is from Anchorage and perhaps delving into this mystery further isn’t her only motivation in traveling to Point Mettier. The only access in and out of town is via a tunnel. Unfortunately, every time an epic storm slams Point Mettier, the first thing to close is the tunnel with no guarantees as to when it will reopen in the aftermath of such a storm. Imagine Cara’s frustration when she realizes she is on the wrong side of one of these storms and predictably so, the tunnel in and out of town is closed.

The townspeople of Point Mettier are a unique bunch. The 205 residents live within the confines of a high rise called the ‘Dave-Co’. They have quite the self-contained community, fully equipped with two police officers, Chief Sipley and Officer Joe Barkowski. Amy and her mom run the Chinese restaurant and the culinary cuisine served up isn’t quite up to par with some of those iconic restaurants in San Francisco. Lonnie is a lone wolf and keeps to herself. She maintains constant contact with the voices in her head and adores caring for her pet moose. The Dave-Co has a post office, a church, an infirmary, and a general store that also acts as a gift shop that offers up all the touristy memorabilia one could possibly want if they ever happen upon this desolate and interesting town nestled in the bowels of the Alaskan frontier.

Once Cara accepts the fact that the tunnel is closed and she is there indefinitely, she settles into doing what she does best: investigate. What she couldn’t know is that the mystery of what really happened is much deeper than a hand and foot washing up on shore. As time unfolds, Cara has some explaining to do when it comes to spilling the beans toward what really motivated her to go to Point Mettier in the first place.

Iris Yamashita wastes no time in ramping up the excitement in her debut thriller. She devotes the early chapters to detailed introductions and descriptions of her characters and paints a lot of color and depth into who they are and what makes them tick. She does a superb job of painting a cast of misfits that stand alone as much as they complement each other with their quirkiness. I have to say one of my favorites is Lonnie. She is a recent graduate of the ‘Institute’ (a psych ward) and certainly battles her demons: "...Lonnie didn’t like the Institute. There were lots of scary people there. Watching her. They were always watching her. Giving her pills. Pills she didn’t need. And there were cameras and bells. Bells that went off at night..." This is a minor sampling of the thoughts that permeate most of the moments in this particular character’s conscious mind. Yamashita has a beautiful style of guiding her audience down a credible path and builds the anticipation and intrigue along the way that wills the reader to keep turning the pages because it just keeps getting better. There is not an obvious or predictable outcome to the growing mystery. Rather, there are wonderful twists and turns to this plot with an ample supply of rich dialogue, great character description and an ample bounty of surprise outcomes throughout. Great job and congratulations on your debut novel Ms. Yamashita!

Quill says: City Under One Roof checks all the boxes of an exciting and unpredictable read that is set in the great wilderness of the Alaskan frontier.

City Under One Roof

Dragon's Eye: Who's Watching You? (The Jack and Maddy Gamble Series, Book 2)

Case of a Puzzling Book: A Maximo Morgan Mystery

A Perfect Night: The Haunted Women, Book One

Powers of Darkness: The Wild Translation of Dracula from Turn-of-the-Century Sweden

Demons, the Great White North and the Blind Detective

The Summer Festival is Murder: A Felice Bowes Mystery

The House of Ashes

The Art of Betrayal: A Kate Hamilton Mystery

Complicit (A Legacy of Silence)

Rock and Roll Murders: An Entrepreneur Finds That Murder is No Business Solution (Based on a True Story)

Revelations From the Dead: Chronicles of the Night Waster

Murder in the East End (A Below Stairs Mystery)

The Obituary Writer: A Murder Novel

Unrelenting Peril (Book 3 in the Multima Trilogy of Corporate Intrigue)

The Legend of Deputy Jim: Prequel to The Last Enemy Series

All the Broken People

Body in the Woods: A Jack Ludefance Novel

Vanishing in the Haight (A Colleen Hayes Mystery)

When the Rules Don't Apply

Urban Limit: They are already inside...

Dog Dish of Doom: An Agent to the Paws Mystery

A Measure of Murder: A Sally Solari Mystery

The 5 Manners of Death

News: A Tale of Too Much Information and a Girl

When All the Girls Have Gone

An Act of Murder

Pages in the Wind

Lawyer for the Cat: A Sally Baynard Novel

Nightmares Can be Murder: A Dream Club Mystery

The Puffin of Death: A Gunn Zoo Mystery

Beyond Suspicion: A Whispering Springs Mystery

Death of a Diva: From Berlin to Broadway

The Great Zoo of China

Things Half In Shadow

The Second Coming: A Love Story

Vengeance is Mine: A Red River Mystery

Hell With the Lid Blown Off: An Alafair Tucker Mystery

Sting of the Drone

The Hunger and the Howling of Killian Lone: The Secret Ingredient of Unforgettable Food Is Suffering

Light Riders and the Fleur-de-lis Murder

Throw in the Trowel: A Flower Shop Mystery

Bowled Over: A Vintage Kitchen Mystery

You Cannoli Die Once

A Fete Worse Than Death: A Hemlock Falls Mystery

The Start of Everything

To Brie or Not to Brie: A Cheese Shop Mystery

Knot What it Seams: A Southern Quilting Mystery

Ring Around the Rosy

View From the Edge

If Hooks Could Kill: A Crochet Mystery

Unbridled Greed: Money is the Motive - Fraud is the Means

Murder of the Cat's Meow: A Scumble River Mystery

How to Tail a Cat: A Cats and Curios Mystery

A Spoonful of Murder: A Soup Lover's Mystery

Peril in Paperback: A Bibliophile Mystery

The Sins of the Father: Book 2, The Clifton Chronicles

Murder on the Half Shelf: A Booktown Mystery

Corpse in the Crystal Ball

The Second-Last Woman in England

A Conflict of Interest

The Man From Primrose Lane

Dark is the Sky

The Nightmare (A Mystery With Mary Wollstonecraft)

How to Get a Literary Agent, In Two Murders or Less

Murder in a Basket

Paths to Divinity: Volume I

A Crack in Everything

Vintage Connor: The Blonde in the Lotus Elite

The Herring in the Library

Sentenced to Death (A Booktown Mystery)

The Quest for Anna Klein

The Valley of Shadows

Mind Your Own Beeswax

The Odd Tales of an Old Man

The Price of Candy

Death By Wall Street: Rampage of the Bulls

Did Not Survive: A Zoo Mystery

v2036: A Tale of Sociopolitical Change in a Militarized Venezuela

A Clause for Murder

Too Much At Stake

Skein of the Crime

A Body to Bones

DeKok and the Mask of Death

Stuff Dreams Are Made Of

Promise Not to Tell

Clawed Back from the Dead

The Darkest Evening of the Year