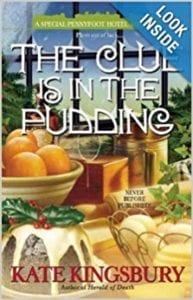 Cecily Sinclair Baxter, proprietress of the Pennyfoot Country Club, was quite busy preparing for the holiday festivities, all the while hoping that “the infamous Christmas curse would not materialize.” Naturally the help’s attention was wandering as love was in the air on the premises. Even Gertie McBride, the chief housekeeper, was having trouble keeping Pansy in line as she fancied Samuel, the madam’s stable manager. Gertie was thinking that Clive Russell, a man with a mysterious past might be the man for her, but with everything in an uproar she had little time to dwell on him. Mrs. Chubbs had gone off to Manchester to visit her daughter and in her place they were stuck with “Tucker the Terrible.”

“Sacre bleu!” Michel screamed at Beatrice Tucker, “You’ve taken a slice right out of ze pudding!” Not that the battle-axe cared one whit about his Christmas pudding because she was head of the kitchen. She’d taken a slice up to Mr. Archibald Armitage, a famous actor in residence for the holiday. Things were boiling over upstairs when Phoebe Carter-Holmes discovered she’d been “replaced as director of carol singers” by Cuthbert Rickling. Fa la la la la la la la la. Phoebe was mad and Cecily’s other best friend, Madeline, could be somewhat daft whenever she went into one of her little psychic trances. Love may have been in the air, but the rest of the lot were going totally barmy.

Nutters and Christmas pudding aside, the aristocratic guests had arrived in Badgers End and the Pennyfoot Christmas celebration would soon begin. However, there had been a “very unfortunate accident.” After Mr. Armitage had taken an unfortunate dip in the pond after rescuing Tess, the madam’s dog, he tragically died in his room. “He didn’t tell the stupid bloke to go in the pond,” Gertie announced to Pansy when she thought Samuel would feel bad about the incident. Madeline’s husband, Dr. Prestwick, was certain the man had been poisoned, but Cecily was determined that the show must go on. No one must know about the murder for she would pursue the villain herself. “Beware, the danger is right there! Evil is near. Be careful.” Did Madeline hold the key to the killer or was it all a load of codswallop? Cecily Sinclair Baxter would have to solve the mystery before the infamous Christmas curse claimed yet another victim (and the constable showed up)!

This fun and ever so slightly hilarious mystery at Pennyfoot will leave the reader chuffed as nuts. Sometimes it was hard to tell whether the excitement lay more with the downstairs staff or the aristocratic crowd upstairs. The mixture of characters, the romance, the squabbles, the murder, and the general kerfuffle, made this cozy mystery loads of fun to read. It was a very quick, light read and I must admit some of the incidents and comments by the characters were just a tad politically incorrect. The lazy receptionist, Philip, couldn’t remember a name if his life depended on it, but he could remember a nose. “Never seen such a big conk. You can see it coming around the corner before you see her.” I could see this cozy mystery was a keeper even before Beatrice Tucker aggravated a single soul at Pennyfoot!

Quill says: If you like your cozy mysteries light, fun, and as delectable as old-fashioned fruit cake, you'll love this Pennyfoot Hotel mystery!