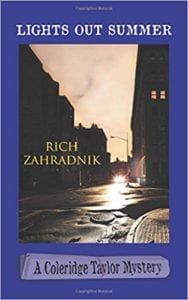 This is Book 4 in the fantastic Coleridge Taylor Mystery series, and for those who have not yet added this particular character to their at-home library, you need to ASAP.

It is the 1970’s. Coleridge Taylor (AKA: “Taylor”) is a die-hard journalist who still has his pride (i.e., does not believe in tabloid magazines), and is still dedicated to real news that everyone else overlooks. The story opens as a serial killer arrives on scene that the news agencies can use to scare everyone living in NYC, while also using the story to climb the ladder of success. Taylor works for the City News Bureau, a much smaller organization than, say...The Post or The Times. He begins by sitting in with a ton of reporters/bottom-feeders at a city conference where they are talking about a killer who is hunting women with a .44. It takes only a short time to grant a title to the killer: “Son of Sam.” But Taylor stumbles over another young woman who was taken out – not with a .44, so it doesn’t rate nationwide news. But he wants to solve the crime and tell the victim’s story. Martha Gibson, a young Black woman, was gunned down in her own apartment building the same night “Son of Sam” struck elsewhere. Therefore, all the reporters go after the "Son of Sam" victim, leaving Taylor with the less visible victim.

But Taylor really has no idea what the heck he’s getting into. As he begins to delve into the crime, he meets the sister of the victim who has given her own surroundings to drugs and a boyfriend who boasts a career as a contract killer. Certainly she and her rotten love could be behind the murder, but...there’s more.

Taylor soon gets into the facts and realizes that Martha was working as a maid for a highly wealthy/in-the-news family named DeVries who live on Park Avenue. This is one of those families who like to fight amongst themselves. But there is also another worker in the house who tells Taylor of a call made from inside the walls that poor Martha heard that preceded her murder. Apparently the call mentioned everything from ‘money being gone’ to someone who ‘had to be stopped.’

Taylor and his detective girlfriend Samantha, end up ingratiating themselves during a family dinner party where all the players of this family are open for review. From a wife who seems to know nothing to a mean young man who seems to hate everyone, the family is ‘rich’ with suspects. Now, add to that a blackout that sends NYC into a 24-hour-long period that’s filled with the vilest of sins being committed, and you are glued to the story as Taylor attempts to track down his own killer before disappearing himself.

Readers will absolutely love Taylor, if they don’t already. This is a character with many layers. A man who has just lost a father who was not exactly a nice, pleasant guy, and missing a loving brother who was listed as MIA in Vietnam, but who Taylor truly believes is gone. Deep down, that’s why he goes after these ‘smaller’ crimes. He wants all victims to have a voice and someone to fight for them, not to be forgotten because some sicko rates more front pages. This author has, quite literally, “Nailed it!” when it comes to creating the perfect visual and suspenseful mystery led by a believable and easy-to-like character.

Quill says: All are standalone books in this series; however, by reading just one, ‘Coleridge Taylor’ and his creator will have you running to buy the rest.