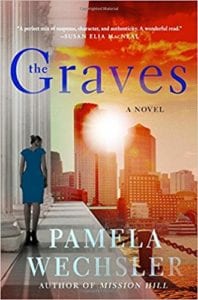 Abby Endicott works in the district attorney’s office as chief of the homicide unit in Boston. Although she does well, her parents wish that she was not in that position. They have even gone so far as cutting her off from her “allowance” until she leaves her job and her current boyfriend Ty. Although Ty does have a criminal background, he has moved on and is pursuing a music career.

Currently, Abby is not supposed to be taking cases. She was placed on a leave of absence after her previous case almost got her and Ty killed. When her friend Kevin, a detective, calls with a case that could potentially be linked to a serial killer, she knows she has to take it, no matter the consequences.

When Abby arrives at the scene, Kevin fills her in on what is going on and what they know so far. While she is looking at the scene, she sees a mark on the victim’s hand that is similar to the mark that a local bar uses for its patrons. As Abby is filled in on the crime scene, it is starting to sound similar to another recent unsolved case. When her boss Max shows up at the scene, and finds that she has taken the case, he isn’t too happy about it. Although Max allows her to take the case, he makes it clear that she isn’t supposed to be doing any of the detective work. When Abby announces that she is going home for the night, Kevin offers to take her home. Instead of going home, they head off to the bar that could have been the last place their victim was seen.

When they arrive at the Crazy Fox, they ask the manager if their victim had been there before. Since he cannot give them a definite answer, they ask to see his camera footage. As they are looking through the camera footage they spot their victim. Although she came in the bar alone, she did leave with someone. When they ask the manager if he knows the man the victim left with, he says that it is Tommy Greenough, the oldest son of a senator.

After this latest break in the case, Abby decides to talk to Max about it. While talking with Max, Abby learns that he will be running for Mayor. This leaves the DA position open, which Max thinks she should run for. Although this would be something Abby would like to do, she doesn’t think that her chances will be very high when people find out that their murder suspect is none other than the senator’s son.

As Abby and Kevin continue to investigate, they find themselves not only learning about their victim, and finding another victim along the way, but they also find that members of Boston’s elite are becoming mixed in with the case. Although Abby would love to see her future as the DA, she knows that she must stop at nothing and not let politics get in the way of solving her case.

The Graves is an interesting read. Not only are you taken through the whole process from the crime scene to the investigation to the trial, but there is also a romance story playing out as well. As the book goes on, the mystery and romance come full circle and tie everything together. It will definitely leave you on the edge of your seat and throws in an unexpected twist as well.

Quill says: The Graves shows you all aspects of a criminal case. It is a great mystery with some romance tied in.