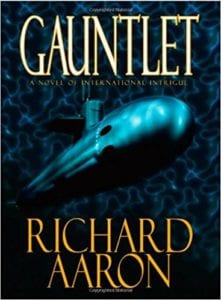 As the world unites against the threats of global extremism, nefarious forces hatch an ingenious plan to attack the West. The former terrorist state of Libya has decided to rejoin the community of nations by relinquishing it’s huge stockpile of Semtex plastic explosive. The terrorists’ stock and trade is to be destroyed in the desert. All is well until US intelligence wonks discover that a large batch of the Semtex has been hijacked by unknown forces. Now the chase is on to recover the missing explosives before they can be used to wreak devastation and destruction on the US.

This fast paced cautionary tale is well written and moves along briskly. Unlike many other novels in this genre, The Gauntlet doesn’t get bogged down by excessive preface and instead jumps right into the story feet first. The characters, well developed and three dimensional, are interesting and believable. Aaron spends considerable time and effort introducing the reader to the other side of the equation, the extremists bent on global destruction. We meet a terrorist mastermind who views himself as a businessman merely providing a service to an angry half blind Emir who hates the West. An autistic and emotionally unstable computer genius is the unlikely hero as he matches wits with the bad guys.

Aaron does an excellent job ratcheting up the action as the story races toward an exciting climax. The chapters become shorter and more succinct. As I read the last few pages I was eager to find out how the author would tie up the loose ends. What I discovered on page 488, the last page, was that a more appropriate title to this tome would have been Gauntlet I. Total cliffhanger! I want answers!

Quill says: The Gauntlet will pull you in and leaving you wanting more.