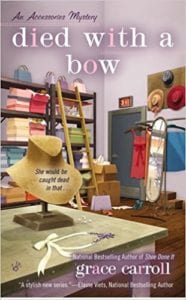 Rita Jewel worked at Dolce’s, an upscale boutique that turned fashion victims into upscale fashionistas. Rita was Dolce Loren’s right-hand girl and mentor until Vienna Fairchild was hired and she was practically relegated to the “role of backstage understudy.” It was a seriously sickening situation. Honestly, from a top salesperson to unpacking boxes and folding clothes was demeaning at best. To top it all off, the three guys she had been dating, were simply not on the radar at the moment. Aunt Grace didn’t want her to act like a floozy and chase after men, but Rita still wanted to check in on Detective Jack Wall, the “sexiest cop” ever to walk the streets of San Francisco.

The annual Bay to Breakers Bachelor Auction was coming up and of course she was dateless. Oh, and penniless if you counted the fact that she wouldn’t have enough money to even buy a date at an auction. Vienna wouldn’t have a problem because she was not only hot and gorgeous, but also had more money than Carter’s had liver pills. Dr. Jonathan Rhodes, one of Rita’s not-on-the-radar this weekend guys, called and asked her to bid on him. He wouldn’t have any problem because Vienna would outshine her once again and not only bid on Jonathan, but win the date. Even Dolce had her hooks in William Hemlock, but after all was said and done, Rita ended up with Jonathan’s date ticket because Vienna’s boyfriend would kill her if she accepted.

Rita wouldn’t have to check in on Jack because it wouldn’t be long before he was checking up on her. When she went back to Dolce’s the next morning to take back her dress, she found Vienna lying on the floor all dolled up in “her dress with the pink bow.” She was deader than biker-chic and wouldn’t be rolling down the road anytime soon. Dolce’s protégé was some dead and if she didn’t want to be pegged for the murder she’d have to figure out whodunit because her prints were all over the place. “You can’t,” Jack asked, “pass up a good funeral, can you?” Everyone knew that murderers often showed up at funerals and she was right. “I was at her funeral, yes. And next I’ll be at yours ...” What kind of dead was Rita going to be? How could she possibly get out of this mess?

This trend-setting cozy mystery series is proving to be *the* series for readers with good taste. The tale was delightfully unpredictable and oh so realistic. Rita Jewel was stuck in a situation that most of us have found ourselves in at one time or another. The job hit a dead end when a young upstart took her place and her Saturday nights were disgustingly dateless. Rita wasn’t an overly pushy sleuth, but she was determined to prove her innocence by sticking her nose where it didn’t belong. I appreciated the light touches of humor, particularly when the professional writer turned out to be one who penned the “fortunes for fortune cookies.” If you want a very likeable sleuth, Rita Jewel is a definite gem!

Quill says: Everyone from those who love every-day wear to haute couture will love this cozy 'n classy mystery!