Unrelenting Peril (Book 3 in The Multima Trilogy of Corporate Intrigue) 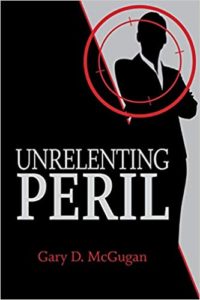 Unrelenting Peril (Book 3 in the Multima Trilogy of Corporate Intrigue)

Gary D. McGugan pens the consummate ending to his Multima Trilogy, in the series’ third and final book, Unrelenting Peril.

Surviving the latest trajectory of danger at the end of Book II, Suzanne Simpson settles into her role as CEO of the grocery chain under the Multima empire umbrella. While she lives to breathe another day beyond the grasp of mobbed up ‘godfather’ of The Organization, Giancarlo Mareno, suffice it to say he is none too pleased that he has been out-smarted once again by this beautiful and extremely talented Multima nemesis. Fortunate for Suzanne, the greatest gift she receives is to learn John George Mortimer’s health is improving remarkably. After all, he’s much more that a boss to her.

Meanwhile, just when we thought Howard Knight was long gone and out of the picture once and for all, it would seem he’s resurfaced. However, he’s not quite sporting an Armani suit and rolling up to VCI headquarters. Rather, he and his paramour are currently tucked away in the bowels of Guantanamo Bay Detention Center. Wait! What? How did he end up there and what about his betrayal to Mareno? In due time all questions will be answered. Howard’s future is reliant on some very difficult decisions he needs to make and little to no time left to make them. We also left James Fitzgerald with a speedier than planned retirement on his plate. However, after the tragedy that struck the Fitzgerald household prior to his retirement, thoughts of happily ever after with Dianne in their perfect little hideaway was never going to happen. It seems Dianne’s plans for joining James in his retirement didn’t include James. Suffice it to say, eyebrows will raise over the course Diane takes sans James.

I commend Gary McGugan for bringing old and new characters home to roost in the final book of the Multima Trilogy series, Unrelenting Peril. As was the case with both Books I and II, the end of this series was just as compelling and intriguing as the beginning. These books have such high-velocity energy and action and the surprises sprinkled throughout the read are phenomenal. The characters continue to assume greater depth in their respective personas and the introduction and roles of new players in this last installment are just as viable and credible. Reading this series was like sitting on the edge of something monumental about to happen and the only way to experience the moment was to turn the next page. However, just like the ocean, waves of Unrelenting Peril will roll and grow in sets until the seventh wave crashes; only to be followed by the next series of even more volatile waves to come. Brilliant Mr. McGugan! You have nailed the art of spinning the penultimate tale of corruption, greed and success among the many pages of this fantastic trilogy! I cannot wait to see what’s next.

Quill says: Unrelenting Peril is beyond ‘unrelenting’ and a brilliant end to the Multima Trilogy series.