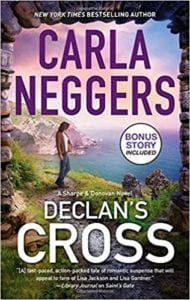 For any fan of the Sharpe and Donovan series, you will fall into the pages of this book as if welcoming home old friends you’ve really missed. If new to the series, the good news is this is most definitely a stand alone story (but it is so good, you will run back and get the other two).

This tale leaps from Ireland to the United States and back again, telling of an art theft that took place ten years ago. Colin Donovan, an undercover agent with the FBI is coming down from a rather harrowing mission and has gone to Ireland to relax. His girlfriend, Emma Sharpe, who is also an FBI agent, heads along to the Emerald Isle, as well.

Emma has a background in the art world. She lived in Maine as a child near the Donovan’s hometown. An ‘almost’ nun, Emma left her calling to move to Ireland where she worked for her family’s business in Art Recovery before then working for the FBI art crimes division.

Julianne Maroney is trying to get over a romance with Andy Donovan and has also gone to Ireland to recover from her lost love. Heading to the village of Declan’s Cross on the Irish coast, she meets the two agents; much to her dismay, seeing that Colin is brother to the man who broke her heart.

A decade ago an art thief entered a mansion in the town of Declan‘s Cross and Emma Sharpe’s grandfather had investigated the theft, but the stolen art has still not been found and the thief has never been apprehended.

Add in Lindsey Hargreaves to the cast, a marine biologist who was the person who invited Julianne to come to Ireland but forgot to pick her up at the airport, and soon Colin and Emma’s downtime turns into a full-blown investigation. When a character ends up dead, the hunt begins for a killer.

This complex, entertaining mystery is beyond interesting (not a shock, considering Neggers is an A+ writer), and all readers will truly enjoy it. The old saying: “You can’t tell the players without a score card,” rings true in this narration, and the thrills never stop.

Quill says: This book is an excellent combination of romance, suspense and family, making it an unforgettable read for many genres.