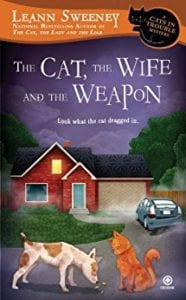 Jillian Hart had just returned home to Mercy, South Carolina after selling her wares at several craft fairs and cat shows. It was a tiring, but relaxing venture because she seemed to attract corpses like rugs attract lint and she needed a breather. Evie Preston was the third one she'd found and if that kept up she'd have to open up a funeral parlor instead of sewing cat quilts. There was one thing she'd been happy to attract and that was Tom Stewart, the owner of the security company who installed her cat cam. Jillian had the cat cam installed because she liked to keep an eye on her three cats, Syrah, Merlot, and Chablis when she wasn't at home. She would have liked to have had it aimed at Tom because somehow he'd mysteriously disappeared.

Jillian wracked her brains to figure out what went wrong. Had she done something to turn him off? He wasn't even returning her calls. She'd considered calling his mother, but she was an "odd bird" at best and when she saw a car in Tom's driveway she decided to stop. "I'm not scary, am I? `Cause you look like your panty hose are quivering," a strange man declared when he opened the door. Turns out the wisecracking jerk was Tom's half brother, Bob. Duh huh! There would be a lot of people coming out of the woodwork like termites rushing for cover after the exterminator shows up, including an ex-wife named Hilary and a boy name Finnian, Finn for short.

It didn't take Jillian long to figure out that something was terribly wrong after Tom came back looking something like the cat dragged in. She was going to tell him that brother Bob had let his diabetic cat Dashiell loose, but when she saw his battered, bruised, and cut face she knew it could wait. Her household would soon be upended. Tom's stepson, Finn, would be moving in with Jillian. Finn's dog, Yoshi, would be moving in with Syrah, Merlot, and Chablis. Oh, and there was that dead guy in Tom's car. Jillian was beginning to think that she really didn't know Tom at all. What could possibly happen next? It was Deputy Rodriguez who broke the unfortunate news to her: "Unless this is a woman with very large feet, you've found a dead man."

This kinky `n crazy series just seems to get better and better. The new cast of characters adds a whole new flair to the plot, but some of my favorites are still on hand to fill in the blanks. Of course there's always that tawdry Lydia, "the craziest assistant coroner on the planet," who has a thing for Tom and Jillian's best friend, Deputy Candace Carson, the cop with a quirky evidence obsession. If you want an author who can dish up a uniquely marvelous plot every time, you can count on Leann Sweeney to deliver. The characters were wildly appealing, the action was fast-paced, and the plot will keep you wondering what will happen next.

Quill says: No doubt this is another cat mystery that's as delectable as savory salmon!