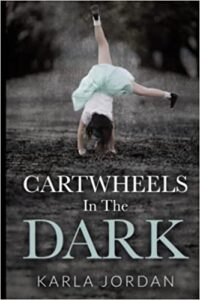 Karla Jordan’s debut novel, Cartwheels in the Dark, is entertaining and has a nice balance of surprise and credible dialogue throughout the read.

Kallie Douglas wasn’t always Kallie Douglas. Her given name was Kahlua Jansen and at the tender age of ten, her worst day would eventually become her best. Native to Somerfield, Maine, Kallie vowed the only way she would ever see that Godforsaken town ever again was the next day after never. She met her forever partner, Cam, in college and post-graduation, they married and settled into happily ever after in Vienna, Virginia.

Given her horrific beginnings with a set of alcoholic and abusive parents, it’s no wonder Kallie would become a renowned philanthropist in greater Washington D.C. where she focused her cause on providing for children in need. Cam was equally successful in the creation of what ultimately became a nationally recognized advertising agency. However, when Kallie receives the tragic news her beloved caretaker, Maddie Warren, recently succumbed to her battle with breast cancer, she realizes she must return to Somerfield to take care of her final affairs and estate.

During the flight to Maine, Kallie has plenty of time to think about that day so many years ago when Maddie Warren rescued her. Barely ten years old and Connie Jansen, Kallie’s biological mother, decided she had one too many children. Tossed on a park bench in the heart of the small town, Connie Jansen instructs Kallie not to move no matter what. The last thing Kallie remembers of her mother was to watch the family car grow smaller and smaller until it disappeared over the distant horizon. Kallie shook the thought from her mind as the flight attendant announced their imminent arrival to Maine. What Kallie couldn’t possibly know is she was about to embark on greater challenges beyond finalizing the affairs of her dearly departed Maddie Warren.

Congratulations to Karla Jordan for the release of her debut novel. There are a few nuggets of gold in the scenes she paints across the pages. One line that stands out for me in the early pages is: "...In the winter, icy air would dance around bare feet brave enough to land on the planks..." The author is referring to Kallie’s poor beginnings. This is a wonderful example of showing one’s audience versus telling them how to assess the environment they are in and the fact it doesn’t take a lot of words to paint an incredible scene in the reader’s mind is a credit to the author's skill. There are also a few twists and turns that capture the reader’s attention and will keep you guessing. However, I would caution Ms. Jordan to not get too wordy when setting up a scene. One scene that stands out where this occurred was when character Kallie meets Maine State Trooper Adam Wentworth. Their first encounter was on the freeway when Kallie pulled over to have a mini meltdown. Officer Wentworth did a wellness stop and later that evening, they run into each other again at the local diner. They end up sharing a table to have a burger and fries. The description of how incredibly great the burgers are covered nearly two full pages and the impact could have been made with far fewer words like the single sentence I referenced above. Overall, the story is engaging. However, I would also caution Ms. Jordan to have a more discerning editor’s eye. There are several grammatical errors, and the formatting is off (double-spaced and the font pitch appears large).

Quill says: Cartwheels in the Dark is a journey back in time full of unexpected outcomes.

For more information on Cartwheels in the Dark, please visit the author's website at: karlajordan-author.com