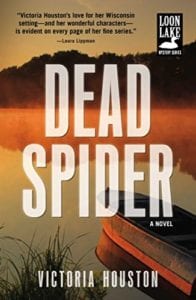 In the seventeenth book in her "Loon Lake" mystery series, author Victoria Houston delivers a satisfying mystery that will keep fans wanting more from the residents of Loon Lake.

Paul "Doc" Osborne, retired dentist and occasional deputy coroner, is attending the annual Loon Lake Youth Fishing Tournament with his daughter Erin. They're hoping that Erin's son Mason might win an award in the "muskie division." But the music is much too loud, the crowds a bit too boisterous, the fireworks have started, and Doc would like nothing better than to get out of there. The annual event is sponsored by Chuck Pfeiffer - the richest man in Wisconsin and a long-time acquaintance of Osborne's. Like many residents in the area, Osborne isn't particularly fond of Pfeiffer as the man has done many hurtful things, to many different people.

As the event comes to an end, screams are heard and Osborne heads in the direction of the commotion. He quickly discovers the reason for the screams - Chuck Pfeiffer has been shot in the head and is quite dead. Police Chief Lewellyn Ferris arrives soon after and the investigation into Pfeiffer's murder begins. With the coroner out of the country on vacation, Ferris enlists Osborne's help as deputy coroner. It won't be an easy investigation as Pfeiffer had a lot of enemies...

As the investigation continues, Osborne, Ferris, and the other officers and staff on the case pour over photos and video taken at the tournament. With the abundance of images and video, the challenge of finding someone or something within the digital evidence is daunting. At the same time, Osborne's fifteen-year-old granddaughter Beth is arrested for doing drugs and there's a robbery at the local nursing home that requires Ferris' attention. With their time and energies split between the various issues, it will be tough to solve Pfeiffer's murder.

Dead Spider was an easy book to get lost in as the story took off quickly and kept a good, even pace. I had not read any of the other books in this mystery series and yet I had no trouble following along and keeping track of the various characters. While the story wasn't as intense as some of the other murder mysteries I've read, it did hold my interest and was perfect for a rainy afternoon read. I look forward to meeting Doc Osborne and the other members of the Loon Lake area in their next case.

Quill say: Dead Spider is an easy, satisfying continuation of the Loon Lake mystery series with likeable characters and just enough twists in the plot to keep you guessing.