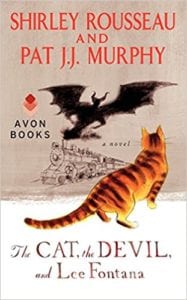 This is a novel that’s most definitely an attention-getter. From the title, to the cover, to the amazing plot and characters, this literary duo captures the imagination and provides a perfect one-day read.

We begin with a different cat than the one usually written about by Murphy. For those who know her famous feline, Joe Grey, you will be more than happy to meet yet another kitty who brings mystery, aid and a bit of the supernatural along for good measure.

Meet Misto, a prison cat. Although it has gone to its heavenly reward, the cat is still floating about in the prison keeping track of things; sometimes you see him, sometimes you don’t. Said cat is, as all felines are, a Guardian of the Underworld, so the animal definitely knows when something’s fishy. Which brings us to the next character in the title.

The Devil happens to be after Lee Fontana, who will be set free from prison the very next day. It seems Lee’s grandfather once humiliated Satan many years ago, leaving the ‘bad guy’ honor-bound to get his revenge by harassing Lee until he owns his soul. The Devil is nobody’s fool; he believes if someone has just a tiny bit of evil inside them, than they will do what he wants and he will score the ultimate win.

However, Misto begins working his magic, getting into Lee’s mind with thoughts of right and good. Lee has been a criminal all his life, but as soon as he begins to listen to evil and becomes tempted to do something rash, the cat is there to talk him out of it. After parole, when Lee gets out of prison, Satan scares him and claims that if he does just one more robbery, he will be kept in the lap of luxury for the rest of his life. So, who will win? Cat or Satan?

Well, the upside is that Misto leaves the prison behind and travels with Lee on an adventure the reader will never forget; an adventure that will also remind many fans of Joe Grey and his pals in California.

A wonderfully written book, readers will love the whole story of this yellow tabby-cat ghost who is, by far, the brains of the outfit.

Quill says: Everyone who reads Murphy’s feline sleuths will be delighted by this definite ‘must read.’