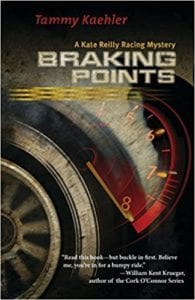 The NASCAR realm is nothing but speed and intensity, which are the two qualities this novel offers in spades.

Racecar driver, Kate Reilly, is not having a very good day on the track at Road America in Wisconsin. It seems like everything she does is a huge mistake. The worst one she could possibly make comes true when she causes a wreck on the track and unleashes a firestorm of hatred by taking out a hugely popular NASCAR driver and sending him to the hospital. Miles Hanson is his name, and no matter what really happened on that track, Kate will most likely be hung out to dry. No one seems to understand that this ego-driven man simply would not make way for Kate’s car to pass, and the ensuing crash not only sends Miles to the ER, but it also takes him out of competition for months. He’s not happy, the media isn’t happy, and the fans of Miles are basically want Kate’s blood.

The official report rules the accident nothing more than a collision; a “racing incident,” which means fault resides with both drivers, equally. Hanson’s fans go ballistic at this announcement. Nash Rawlings, president of the Miles Hanson Fan Club confronts Kate publicly, along with race broadcaster, Felix Simon - a popular figure on the racing circuit. Worst of all is “Racings Ringer,” a blogger who dubs Reilly, “Kate Violent.” The Ringer begins cybertrashing Kate, sending a mish-mosh of unflattering pictures and stories of her past misdeeds to readers across the country. Even after being named one of six female athletes who will represent Beaute Cosmetics’ new line, Kate is greeted with nothing but derision, and brings out all the voices who continue to insist that ‘girls’ simply cannot drive. (Danica Patrick, anyone?)

When Kate’s good friend, Ellie Prescott, dies after being in Kate’s company, Kate’s boyfriend, Stuart Telarday, becomes convinced that the campaign of ‘Kate-Hate’ has gone way too far. While Jack Sandham, owner of Sandham’s Swift Racing, tries to decide if he should continue Kate’s contract with his company, intensity builds. Kate soon realizes that she may not live to drive another race, since someone is waiting out there with a violent plan to end her racing career once and for all. Just as fast-paced as the first novel, Dead Man’s Switch, this new mystery offers a perfect balance of suspense with sports.

Quill says: This is one racing adventure that readers will continue to enjoy until that checkered flag is waved. Enjoy!