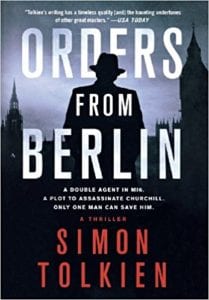 This book is a little different from all of the WWII books that I have read. Not in a bad way, of course, but different. Instead of going through all the trials and tribulations of the entire war from start to finish this novel begins in September of 1940. The United States has yet to be involved. France has already been taken over by Germany and London is being bombed day and night by the Luftwaffe. Winston Churchill seems to be one of the only ones who insist upon keeping up morale in Britain as intelligence agencies in Britain and Germany are working overtime to see what can be done to win this war.

The ex-chief of MI6, Albert Morrison, is thrown over the balcony at his apartment in London and falls to his death. The death is witnessed by his daughter but, because of the darkness in the apartment house, she is unable to see her father’s killer. Two detectives from Scotland Yard are assigned to the case: Detective Inspector Quaid and his assistant, Detective Trave. The senior detective is sure that this is a simple case involving a family problem but Trave is sure that he is wrong. Trave finds a note that was in the dead man’s pocket and also discovers that Morrison was visited by Alec Thorn, Deputy Director of MI6, on the day of his death. Trave thinks that something is fishy about this visit but can’t seem to get a handle on it. He believes that there is a plot to betray Britain that Morrison was trying to stop with the help of Thorn. However, there is a ‘thorn’ in Mr. Thorn’s side as his underling at MI6, Charles Seaforth, is the golden boy at the agency and no one is about to listen to Thorn’s ideas.

Ideas are flying back and forth between secret agents in the Nazi Government and the British Government about a plot to assassinate Churchill. Meanwhile, Adolf Hitler is much more interested in invading Russia than he is in taking over England. Churchill, however, is adamant that Hitler will not invade anyone.

Quill Says: This book is extremely well written and will keep readers on their toes to discover who’s who. Also, the time period is very short and a lot has to be told in a small amount of time. This allows the tension to build quickly toward the end. While the ending is not a surprise as most readers know how things turned out there is still plenty here to explore and this novel is certainly well worth reading. A definite keeper, so enjoy!!