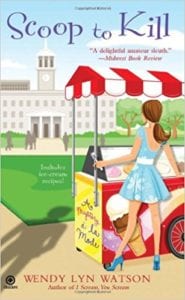 Tallulah Jones, more commonly known as Tally, was usually seen scooping up ice cream at her shop, Remember the A-la-mode, with cousin Bree and Alice Marie Anders, Bree’s seventeen-year-old baby girl. Dalliance was nothing more than a regular old Texas podunk town and Tally made no apologies for that or anything else for that matter. Everything Tally had no patience for was simply a “la-di-freakin’-da” event, which could be loosely translated as laissez-faire in Texanese. Scoop ‘n’ snoop was the name of the game for the two cousins. Tally was trying to keep her nose clean after she meddled in the murder investigation of her ex-husband’s “fancy pants girlfriend,” Brittanie Brinkman. And that she did until things started to heat up in Dalliance and it wasn’t barbecue brisket.

It was Honor’s Day at Dickerson University, a prestigious school where Alice was a first year student. Sacrifices had to be made for relatives so Tally was going. Tally met Dr. Emily Clowder, whom she thought had a “brilliant mind, but she sure couldn’t carry on a conversation” for beans and when her old flame Finn Harper gave Emily a hug it was almost enough to make her barf. She’d much rather be at the Bar None on karayoke night watching Bree do her thing. Things soon went from bad to worse when Alice accidentally stumbled across Bryan Campbell’s bloody corpse. The young twenty-six-year-old doctoral student “had been bludgeoned to death, apparently with an industrial-sized stapler.” The population of Dalliance was now down one at their “high falutin university”...one less man no one would miss.

The “Dickerson Daily” and the “Dalliance News-Letter” were hopping and bopping with speculation right along with everyone else in town when Detective Cal McCormack’s nephew was murdered. Was it true Dr. Clowper flunked him because he refused her advances? No one would ever know because the next time anyone saw Emily was when she was at the end a rope and Ms. Tally just happened to be at the scene of the crime. “Vonda, this is Tally Jones. We need an ambulance...” Tally had sworn to herself that she was going to keep her big Texan barbecue brisket loving nose clean, but this was just too much. Next thing you know, she was on the phone talking to an answering machine. “Hey, Cal. Tally here. Uh, I want to be straight with you, okay? This is my official notice. I’m fixin’ to meddle.” She was going to meddle Texas style and that meant BIG time!

Everyone from Cabot Cove, Maine to Dalliance, “podunk” Texas is going to love meddlesome Tally when she tries to solve a double murder. I enjoyed the ease with which this book crossed the Bar None crowd with the academia of Dickerson University. No one will look up or down at any of the characters in this book, but rather will find an utterly charming character named Tally who can snoop ‘n' scoop like no tomorrow. I loved her down to earth qualities and would roll my eyes and laugh like crazy when she said things like, “I may talk like I got a banjo up my ___ , but I can read, you know.” Can you spell h-o-o-t? The mystery was a step above many of those in the cozy genre in that you’ll have to really think about the little clues thrown out. If you want a fun, festive mystery with a tangy Texan flare, Tallulah “Tally” Jones is going to serve you up one à la mode!

Quill says: If you want a light mystery, this delightful cozy will give you a marvelous read complete with whipped cream and a cherry on top...a delectably delicious indulgent treat (calorie free of course)!