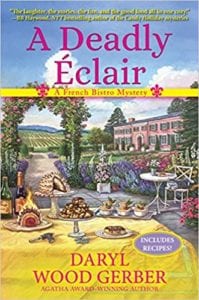 As the series opens, we meet Mimi Rousseau, a seasoned chef, who has been forced to leave San Francisco by her husband's untimely death and his enormous debt. She returns home to Nouvelle Vie in Napa Valley, where her best friend Jo introduces Mimi to Bryan Baker. Bryan, a wealthy entrepreneur who loves to help young people who he thinks hold promise, sees something in Mimi and quickly agrees to finance her dream - a bistro and right next door to it - a cute little bed and breakfast. Both businesses are in need of "love" and Mimi quickly gets to work to build both businesses and work off her debt to Bryan.

The first event at the inn is the wedding of Angelica Edmonton, a famous talk show host who also happens to be the daughter of Bryan's half brother Edison. No pressure to pull off the perfect event...

Mimi and her devoted staff get to work to cook up some amazing, memorable food for both the wedding reception as well as the dinner the night before the wedding. While the food is amazing, some of the guests could use some lessons in manners, including the bride's father Edison, who gets drunk at the dinner and causes some problems. Mimi is able to get the guests, and the dinner, back on track and the evening finishes up on a strong note. But the real trouble is about to begin...

The next morning, Bryan is found dead with an éclair stuffed into his mouth. Mimi is just as stunned as everyone else but when the evidence starts pointing to her, she knows she's going to have to work hard to clear her name - and find the real killer. Shortly after Bryan's body is found, Sergeant Tyson Daly, a childhood friend of Mimi's, arrives to question her. It seems that somebody called Bryan shortly before he was killed, and the call came from Mimi's cell phone. And then when it's discovered that Bryan left a letter in his office that said if he should die, his estate would forgive Mimi's debt, things go from bad to worse for Mimi. Strong motive indeed!

Told in the first person by Mimi, it was easy to get drawn into the story quickly. The author brings Mimi to life and makes her a likeable character, and the reader can certainly feel the pressure she was under, hoping her first event would be a success. Background information is introduced quickly so that the story can gear up and get going. There were a few spots in the book where the story slowed a bit, but overall it was a very enjoyable read. It's not the sort of mystery where I have to stay up late into the night to finish the book, but rather an easy read over several days. Note that when you read this book, you'll likely get hungry over and over as Mimi is always cooking up something delicious. Fortunately, the author has included numerous recipes at the back of the book so readers can enjoy some of the same delicacies that the protagonist created at her bistro.

Quill says: A Deadly Éclair is a strong start to a new cozy mystery series.