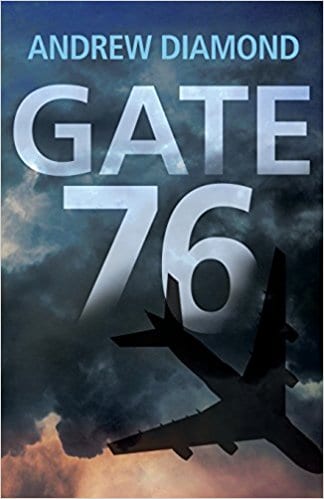 Private Investigator Freddy Ferguson, who is currently on a case involving stolen artifacts from the Smithsonian, finds himself in the San Francisco International Airport staring at a couple ahead of him in the security line. He’s drawn to them, like the proverbial moth to a flame, and can’t help noticing their details; she, a hard-looking, but attractive blonde with bloodshot eyes, and he, a greasy goon in a suit that doesn’t quite match his overall look. He’s got a grip on her elbow, and though she has a stoic look on her face, Freddy can’t exactly figure out why he feels the need to keep watching them. Maybe it’s one of these premonitions he gets that something is not right, and bad things are about to happen. Unfortunately, he may never know, because as the line moves, he loses sight of them and eventually forgets what he sees and starts thinking about the case he’s working on, and what he’s going to tell his boss, Ed Hartwell, when he returns to his office.

Later on, after going through security and stopping for a beer, Freddy spots the same girl, this time completely alone, browsing the airport shops, and then quickly walking towards her gate when she hears the agent make a last call for her flight to Honolulu. What catches his eye this time is the fact that an airport worker who’s supposed to be emptying trashcans is clearly more interested in also watching the blonde lady, and begins to push his cart closer to her gate. At that point, Freddy follows both of them from a distance and watches as the lady checks in at the gate and walks down the gangway to her plane. The trashman moves on and appears to be phoning someone as he walks away. Other passengers continue to board, and the next thing Freddy sees is the blonde woman hurriedly walking back out of the gangway, rustling through her purse, and rushing into the restroom. Eventually all passengers board the plane, the gate closes, and the plane takes off, without the mystery woman aboard. He’s about to walk away when he recognizes the woman, this time with brown hair, sporting sunglasses, and a different outfit with high heels, emerging from the restroom and making her way to another stop a few gates down from the original flight. She again checks in at the gate, but this time she boards a flight to Chicago.

PI Ferguson eventually boards his plane heading towards Washington Dulles International Airport. During the flight, he can’t help but spend time thinking about what he witnessed earlier at the airport. He can’t get it out of his head, something is niggling inside his mind, perhaps it’s one of the premonitions he often gets not only from being a private investigator, but from his troublesome past as a champion boxer. When the flight lands in Washington, he walks out into the airport and immediately his eyes are drawn towards breaking news playing on a nearby television. The flight bound for Honolulu never made it to its destination. Reports say the flight was fully booked, but Freddy knows the truth, not all the passengers were aboard the flight that went down into the ocean.

Like a dog with his favorite bone, Freddy Ferguson is in hot pursuit of answers, and won’t give up trying to find the blonde woman, despite a few run-ins with law enforcement, and being told by his boss to “back off” and continue with his current assignment. Readers will be hooked from the shocking beginning of this thriller that has both corrupt law enforcement and politics at its core. They will be whisked through several plot twists as the main character tries to not only discover and find the mysterious woman, but who she is running from, all before they get to her first. However, the author may lose or confuse some readers due to his numerous characters intertwined throughout the storyline; perhaps a character list would be a helpful addition to the beginning of the novel. But that should not dissuade readers from diving into Gate 76 by Andrew Diamond, especially fans of action-packed thrillers. Readers will quickly find themselves following along with the main character, a former boxer with an abrasive past, as he desperately tries to put all the fragmented pieces together and to ultimately put a stop to the blonde woman’s pursuers.

Quill says: Gate 76 is a good read filled with an intense plot, and equally powerful characters that will have readers quickly flipping pages until the very end.

For more information on Gate 76, please visit the author's website at: diamond.me