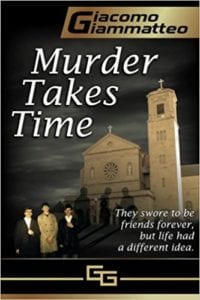 On the cover of this fascinating book there is a little blurb stating, “They swore to be friends forever, but life had a different idea.” If you are interested in Godfatherly books you won’t be disappointed in Murder Takes Time, a debut novel that is well written with very believable characters and a book that doesn’t lag in the narrative. It’s very clear and concise and the reader never gets confused - you always know who is who and what they are up to.

The story begins in New York with a horrific murder that makes Detective Frank Donovan sit up and take notice. He seems to remember other crimes and also childhood pranks from his old neighborhood that are much like the crime that was just committed in his precinct.

Some years ago Frank and his buddies Nicky and Tony took a vow of Friendship and Honor. These kids all grew up in Wilmington, Delaware in a neighborhood that contained mostly Italian and Irish people and it was said that the former grew up to be mobsters and priests and the latter, cops and priests. It seemed to work out for these three boys as one grew up to be a cop and his childhood cohorts were on the other side of the law. Frank chose the law as he came from a home that he couldn’t stand and made some bad decisions in his life he wanted to rectify. Nicky’s mother had died in childbirth and he grew up with a very caring father while Tony’s mother Rosa took very good care of him and helped bring him up. As they grew up one of them had a secret that he kept from the others, a secret that would have destroyed a friendship. Another had to go to jail for a time and lost the love of his life. When they became adults they all ended up in New York City and got together on occasion. Frank had to be careful as he was a cop and the others were criminals. This could have gotten him into trouble if the wrong people observed him with his friends.

To get back to the original murder, Frank is assigned to investigate and it appears to him that evidence is being left behind at the scene. This evidence reminds Frank of something that happened during his childhood and it makes him suspect one of his old friends is involved in the murder. As Frank remembers the vow of Friendship and Honor he made as a child, he doesn’t want to tell anyone until he knows for sure who is responsible. It quickly becomes harder and harder to keep his vow.

There are more murders and the author takes the story back in time to see what happened in each man’s life that help to explain the directions that they go in as they become adults. Things that took place over 30 years ago up to the present time that had to do with who these boys would become. The author keeps the readers informed about all the characters and does a tremendous job of it. Switching between past and present is sometimes hard to take but not with this author. Readers will not become lost as the author explains everything in detail and you can keep up with the story without going back or forward to find out where you are.

Quill Says: This is a truly honest portrayal of the code of honor talked about in the boys' past and one of the best mob-related mysteries that I have ever read. As this is the first book in the Friendship and Honor Series, readers will be waiting impatiently for the next.