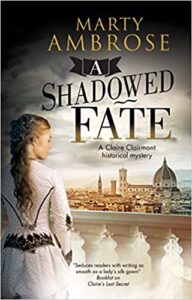 Marty Ambrose delights her audience with the second book in her Lord Byron Mystery Series trilogy: A Shadowed Fate.

The year is 1873 and Clair Clairmont is still reeling from the information she learned at the end of book one. Now, more than ever, she is determined to do whatever it takes to find out the true fate of Allegra; her daughter by Lord Byron. On the heels of murder and the arrival of new information from her dear, old friend Edward Trewlany, it’s time to make plans to travel to the convent of Bagnacavalla near Ravenna. Ravenna is the last known place her sweet child Allegra was seen so many years ago. Nothing could prepare Clair for the destinies that lie ahead in her journey.

Suffice it to say betrayal from those Claire trusted most is ever present. As she prepares for her journey to Ravenna, yet another challenge presents itself. The valuable Cades sketch that was given to her by Rossetti has been stolen. Clair is already surrounded by peril and unknown dangers on her horizon. The theft of the precious Cades sketch—something intended to protect her and her family from abject poverty, leads to a new plan. The road ahead in search of the truth is far more treacherous than she had originally thought it to be.

Marty Ambrose has done an admirable job of creating and developing a cast of characters willing to sacrifice everything to arrive at the truth and a life worth living. Character Claire Clairmont may be getting on in years, but Ambrose doesn’t allow this factor to get in the way of painting not only a woman of substance, but also one with great conviction. Ms. Ambrose takes her time with the writing of each incredibly descriptive scene—scenery not only rife with distinct attributes, but settings that lend way to fantastic dialogue that is true to the period. Her bio depicts credentials of a background anchored as a ‘Romantics scholar’ and A Shadowed Fate is testament to her ability to deliver just that. I’ve not had the pleasure of reading the first book in this series but will endeavor to do so. I look forward to the continuation of the last book in this series and welcome the next adventure Ms. Ambrose pens across future pages.

Quill says: A Shadowed Fate is a captivating read with superb prose and dialogue that flows naturally across every page.