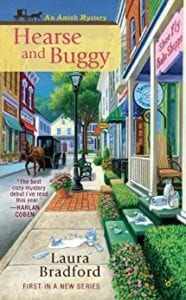 Claire Weatherly left her frenzied lifestyle behind her in search of a more peaceful existence in Heavenly, Pennsylvania. She wasn’t cut out to be a “Wall Street wife” and she soon settled in with her Aunt Diane at her inn, Sleep Heavenly. Claire had already begun to establish her own business gathering up beautiful Amish creations to sell in her shop, Heavenly Treasures. Heavenly was the word for everything she saw around her, a portent of good things to come...or so she thought. Esther King, her young assistant, was harboring secrets in her heart, secrets that would alter Claire’s perception of paradise in the land of the Amish.

Walter Snow, the previous owner of Claire’s shop, left Heavenly in a state of shock after he’d embezzled money from the townsfolk. He’d quietly skimmed off the top of their consignment monies, betraying their trust in him. Walter was gone, but the memory of his misbegotten deeds remained. In a matter of months Claire had begun to know and cherish her neighbors. Ruth Miller, the owner of the Shoo Fly Bake Shoppe next door, was as quiet as her twin brother, Eli, was loud. Eli would soon have plenty to squawk about when mysterious acts of vandalism began to occur at Ruth’s shop and a letter arrived on the doorstep claiming her “baked goods made people sick.”

The Lighted Way connected the Amish with the English, but soon the light would be snuffed out in one of their own. A body lay brutally strangled in the alleyway between Claire and Ruth’s shops. Nellie Snow began to scream as she demanded the arrest of Eli, “You killed my Walter.” He was a man who few would miss, let alone mourn. Benjamin Miller claimed that the Amish did not fight, nor did they drink, or kill, but someone had. Detective Jakob Fisher, a man who had been shunned by the people of Heavenly, would be called upon to solve the mystery of the unusual murder. He stirred something in Claire’s heart, but could she look beyond that? Would Claire be able to bridge that gap and help the community overcome tradition and talk to Jakob?

This soothing, seemingly peaceful mystery makes its stunning debut in Heavenly’s Amish country. Claire Weatherly, a woman who left behind a life to seek a dream, meets up with Detective Jakob Fisher, who also left behind his to seek his life’s work among the English. This mystery exquisitely captures the Amish culture, including the dialect. Claire’s personality meshes well with that of her chosen neighbors. She unwittingly becomes a bridge between two worlds as she pieces together the scattered clues that help Jakob solve a highly unusual murder. The threads of the Amish culture are woven through these pages as tightly as that in a braided rug. This is one series you could lose your heart in!

Quill says: This marvelously crafted mystery will garner a huge readership with its heavenly debut!