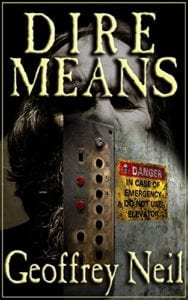 When asked about working at a shelter, Mark Denny, the main character in Geoffrey Neil’s debut novel Dire Means, replied, “I’m fortunate. So I try to give back as much as I can.” Mark’s answer, as well as his attitude toward those less fortunate may well have saved his life. However, Mark’s desire to help the homeless also swept him into the spotlight with a vigilante who planned to come to the aid of the homeless in Santa Monica, California with a bizarre plot of murder and mayhem.

Dire Means gets off to a quick start with the abduction of three Santa Monica residents, people who have shown their disdain for the homeless. The kidnappings are handled with precision and keep the reader guessing as to the motives of the kidnappers. Will the hostages be held for ransom, or is there a worse fate in store for them?

Enter Mark Denny, a computer whiz who has been stumbling along after the death of his close friend and partner, Carlos. One day, while Mark is stopped in his car at a traffic light, he catches sight of a ragged-looking man begging. The man wants money for gas for his stalled car. Every car’s occupant ignores the man’s pleas except for Mark who offers to get the gas, but before Mark can stop him and much to his chagrin, the man jumps into Mark’s car, insisting he ride along. At the gas station, Mark is violently attacked and car-jacked by the stranger.

Because Mark has a strong dislike of the police, he refuses their aid when they arrive. The injured man stumbles along, trying to get home. With no ID, bleeding, and beaten, he is treated like the begger he tried to help just minutes before. It is a rude awakening for both Mark and the reader. But Mark is not deterred from helping others and soon he is hailed as a hero after keeping a desperate man from jumping off a building.

While Mark is busy dealing with his problems, those unfortunate souls who were kidnapped begin reappearing as corpses. The only connection between the victims is their cruelty to the homeless. In fear, residents begin aiding the homeless and downtrodden in any way possible, hoping that the vigilante killer will note their kindness and not target them. But how long will people continue their false kindness before growing weary? And can the killer be stopped?

Events for Mark take a strange turn when he gets a box with a rigged cell phone inside. Connecting to “Pop,” Mark is soon offered a consulting job by the mysterious man. Just what the job entails, and who exactly Pop is, will be an eye-opener.

Dire Means grabbed me from the very first page when Keith, an obnoxious businessman, is introduced. The author doesn’t want you to like him and indeed, the reader will not weep when Keith is abducted. As the two stories unfold, they slowly intertwine until Mark, the hero of the downtrodden, becomes a victim (in an unexpected twist) and he too, must fight to save his life.

On the very first page of the book is the statement, “In nine days, Keith would be dead. In eight days, the crumb that clung to his lip would be a feast – if it were still stuck there to be licked.” My first reaction upon reading this was confusion. But as I delved deeper into the story, the meaning became clear – in a very unsettling way. You’ll want to read every page of this book to see what happens when a powerful vigilante will stop at nothing to promote the cause of the homeless.

Quill says: A haunting novel that will stay with you well after you have finished reading it.

For more information on Dire Means, please visit the book's website at DireMeans.com