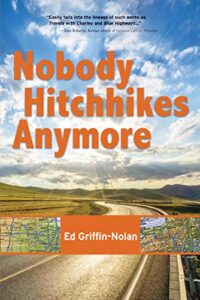 Forty years after he enjoyed some hitchhiking escapades in his youth, author/journalist Ed Griffin-Nolan takes to the road once more.

Against the advice of many sane people including some of his friends from the old days, but with the blessing of his wife who knew it was useless to try and stop him, Griffin-Nolan set out from Syracuse, NY on a rainy day in 2018 to ride by thumb to California. He had a backpack, heavier, it felt, than in the old days, filled with plenty of socks, water and some emergency foods. Upgraded from his younger days, he carried a cell phone that would allow him not only to call home but also to take pictures along the way. An inveterate interviewer, the author saw every ride as an opportunity to get to know a fellow human, and his book is about that more than anything. His first ride with Rob is typical: the driver told him about a brother who hitchhiked in the ‘70s, and offered to take Griffin-Nolan just a bit farther than at first intended. The author carried a sign with the book’s title, attracting curious drivers, and gave out armbands with the same inscription to folks along the way who took an interest in his journeying. Surprisingly, many of the folks who stopped to pick him up were females, even young women, some with children in the car – and most had stories to tell of their own hitchhiking experience. Several men talked about their departed wives, sharing an intimacy that would be unusual in any other setting. But, as the author says, “the road is a place inside us, where our yearnings meet our doubts” and “people open up more than just their car doors.”

As he recounts his travel recollections of 2018, Griffin-Nolan also harks back to the ‘70s, comparing that time with this. He found as much openness as before, perhaps more now that our culture has in some ways become more guarded and those who offer rides may be hoping for a captive audience. He encountered only one African American hitcher in 2018, whereas in 1978 there had been quite a few. He heard more overt racism from a couple of drivers than ever in the 1970s. Contrary to the warnings he’d gotten before embarking on his trip, he felt little or no sense of menace, only a couple of times instinctively avoiding offers from suspicious characters. His observations of the familial kindness of strangers in modern-day fast food joints is a highlight. And his writing is strong, allowing us to “see” him standing in a bad place on the road or dragging himself to a motel that looks so close by car but is a very long walk indeed for an older guy with a heavy backpack. The trip, which took 18 days, was filled with small, heartwarming encounters, the last ride being offered by a “grandpa in the driver’s seat and a Toy Pomeranian sleeping on my lap.”

Quill says: Griffin-Nolan’s spontaneous, unpredictable pilgrimage to revive old memories works wonderfully as a reminiscence for those who were there in the ‘70s and as encouragement for those who might contemplate such a venture now.

For more information on Nobody Hitchhikes Anymore, please visit the publisher's website at: www.rootstockpublishing.com

The Streets of Paris: A Guide to the City of Light Following in the Footsteps of Famous Parisians Throughout History

Living in Italy: The Real Deal – How to Survive the Good Life

Letters to Zerky: A Father’s Legacy to a Lost Son…and a Road Trip Around the World

Letters to Zerky: A Father’s Legacy to a Lost Son…and a Road Trip Around the World (A Companion CD)

America the Edible: A Hungry History, From Sea to Dining Sea

Fodor's The Complete Guide to the National Parks of the West, 2nd Edition

At Home in the World: Memoirs of a Traveling Woman

Live Your Road Trip Dream: Travel For A Year For The Cost Of Staying Home

Drive I-95: Exit by Exit Info, Maps, History and Trivia