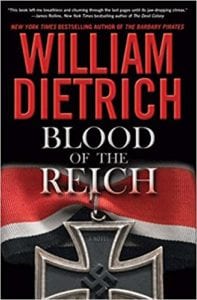 An unforgettable tale, beginning in 1938, on the edge of World War II and, alternately, in present day Seattle, WA. This story is about a man, Dr. Benjamin Hood, who has an office in the American Museum of Natural History in New York, and Kurt Raeder (one of the much-hated Nazis) who are both sent by their superiors to Tibet in order to find a mysterious and dangerous substance that will be powerful enough to win the war that is rumbling towards Europe.

IN BERLIN, 1938: SS Officer Heinrich Himmler is telling explorer, Kurt Raeder, to go to Tibet to find a secret power source that is thought to be hidden in some very sacred mountains. This is supposedly a mythical type of substance that will give people eternal life. However, in America, zoologist Benjamin Hood, along with a female pilot, Beth Colloway are also racing to the site to stop Raeder. Naturally, the usually power hungery Nazis want to get to it first and the Americans want to stop them. So far, it's pretty cut and dried. But, hold on to your hats folks, this book is full of surprises.

IN SEATTLE, PRESENT DAY: Software Saleslady Romminy Pickett is rescued from death by a mysterious stranger when her car explodes in a parking lot. This man claims to be a journalist who is writing a story about Tibet and says that he knows the truth about who she really is and her family heirlooms may have secrets that will save the world from an evil that is rising once again. (Bet you can guess what it is?) The two of them, after many small adventures head off to Tibet to solve the mystery of Romminy's birth and the Nazi's visit in 1938.

This book is a thrilling trip through the past and present that goes to the mountains of Tibet to the Pacific Northwest and back. Also, side trips to France, Switzerland and of course, Germany. It is overloaded with great adventures, history, and never to be forgotten characters. This author is a first class writer and outdid himself in this book. It has everything including romance, adventure and the people we love to hate the Nazis. This reviewer thought at the beginning that just about everything including the Nazis in WWII had been done. But, wrong again!! We don't want to reveal too much as the book is full of twists and turns and we don't want to spoil it for anyone. Pick this one up, you won't be sorry.

Quill Says: If you liked the DaVinci Code, you'll love this. A fantastic book!!