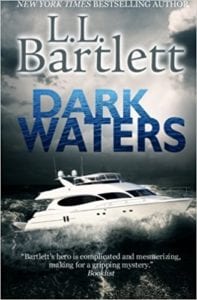 The light was pulling him toward it, with “icy-pinpricks of energy” penetrating his very being. No, no, it couldn’t be happening again. When Jeff got his head bashed in by a mugger eighteen months before he saw plenty of lights, but *the* light was not where he wanted to go, like ever. A simple bee sting had sent him into anaphylactic shock, but his brother, Richard, pulled him out of it. Life was good. Almost. It was until Brenda’s sister, Evelyn, showed up with that punk nephew of hers, Da-Marr. The mugging had left Jeff with uncanny psychic abilities and he knew that the baby Brenda was carrying would be a special kid. Betsy Ruth would have a special place in his heart.

Jeff was struggling with his girlfriend Maggie’s infidelity. Starting over with her was something he wanted, but could he get past an issue that serious? Another issue Jeff Resnick wasn’t getting over any time soon was the fact that that black face of Da-Marr’s practically sent him over the edge. The baseball bat that practically did him in could have been wielded by that kid. “I’m sorry, Jeffy, this black face just doesn’t rub off.” Even his beloved sister-in-law was slamming him over the issue. “And I can’t take responsibility for what other people of my race do ....” Women. One thing for sure was that Da-Marr gave him bad vibes and it wasn’t a psychic thing.

So now Brenda thought he was a racist. What next? A Mr. Jack Morrow had his head blown off while he was sitting in the front seat of his Lexus, that’s what and Sam Nielsen wanted his help in finding the killer. Jack was a greedy scumbag who fleeced people out of their life savings. Any number of people wouldn’t have minded putting a glock to the back of that guy’s head. It was going to be a tough job trying to find out about the man with his stuff being guarded by Meier’s Auction House. A piece of pool chalk wouldn’t cut the mustard, but there had to be a way to “soak up the soul of a killer” and find where Morrow secreted his assets, but how? Sophie Levin could see Jeff’s future and he could hear her voice in his head, “If you are able.” Were Morrow’s evil tentacles going to reach out from the grave and somehow take Jeff with him?

The Jeff Resnick series is going nowhere but up. Anyone familiar with Jeff’s quirky psychic abilities he gained as a result of his mugging knows that despite those abilities, he’s a pretty tough, intuitive investigator. In Dark Waters he’s using his psychic abilities, but is now combining his own investigative experience, pulling the series to yet another level. I’ve come to really enjoy Resnick. He’s tough, he’s gritty, but he’s also vulnerable and real. Conflicts swirl and like the dark waters of the Niagra in this one. “A thirty-seven year-old man should not be sponging off his relatives.” And along came Evelyn. Anyone with the “second sight” will know that Dark Waters is not to be missed.

Quill says: If you are a fan of mystery, suspense is your game, and the thrill of a touch of paranormal, Jeff Resnick is your man!