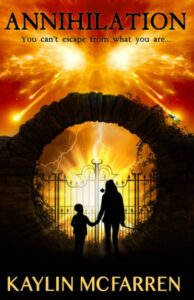 Annihilation is a dark fantasy with psychological complexity, multiple characters vying for power, and multiple subplots that continually take new directions. For readers who like to escape into drama that centers around domination and submission, Annihilation grabs the attention and sustains it.

The story begins with Lucinda, Lucifer’s greedy, soul-eating daughter, reigning as the Queen of Hell, just after her father Lucifer’s death. Her despotism and cruelty crave a battle between Heaven and Hell; she devours souls, so their power becomes hers. Lucinda wants Samara’s powers - Astral Wandering, Soul Whispering, and the ability to move through different dimensions. Samara is so powerful and beautiful because she is part demon, part human, and part angel. But her multiple dimensions get her into nightmarish struggles on Earth and in Hell.

Samara’s father Crighton is half angel and half demon while her mother, Ariel, is an angel trapped in a demon body. The love between Crighton and Ariel may be doomed due to Crighton’s enslavement to Lucinda. Using the couple, Lucinda tries to destroy Samara. Meanwhile, Samara confronts her own inner battle. She is haunted by three murders of her best friend, her former lover, and his recent lustful girlfriend. Samara struggles, feeling responsible for their deaths.

Demons listen to each other’s thoughts, so Caleb learns to watch his thoughts as to not reveal mutiny. In this scenario, the great enemy is gaslighting, the psychological warfare in which one being tries to control another, especially by perceptual and emotional manipulation. The author weaves this kind of psychological warfare into the complex narrative. For readers roused by betrayal, this story offers one after another.

While everyone is distracted with these dramas, Lucifer returns from the dead, punishes Lucinda and then forces Samara into submission, and seats her on the throne as the new Queen of Hell.

This is not a story that pits the forces of good against the forces of evil, but reveals how those two forces cope with fear, sadness, and anger. Emotional tension and release swing from sophisticated to haphazard. A reader’s ability to care about outcomes is at times overwhelmed by sporadic plot twists.

Book 2 in the Gehanna Series, Annihilation, makes the most sense after reading Book 1, Soul Seeker. The rivalries between Lucinda and Ariel feel more urgent if readers know the backstory. Yes, there is psychological depth here, though in some moments, that psychological depth derails the momentum of the plot. For instance, after Ariel buries her first-born son, her inner dialogue makes it hard to follow if she is in grief or sexually aroused. But it eventually makes more sense when her dialogue with Crighton reveals that her sanity is in question.

Trigger warning: the author is generous with graphic descriptions of violent, gory death and torture and less generous in conveying details of scenery or characters’ physical descriptions. Overall, it’s a satisfying read for those who can forgive the numerous typographic errors in the text, and some references may be offensive to those who practice Wicca.

Quill says: Annihilation is a psychological thriller with action-packed dramatic suspense and gory details, a pleasurable read for seekers of dark fantasy.