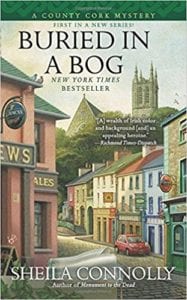 Maura Donovan unexpectedly found herself heading to Knockskagh, Ireland, Gran's birthplace. She never felt, nor ever had the urge to visit Ireland and a South Boston pub was as good as it got. There were letters and photographs in Gran's drawer, placed in such a manner that she knew Maura would somehow pore over them. Nora Donovan would not be forgotten if her granddaughter had anything to do with it and her friend, Bridget Nolan, would want to remember too. After all, they'd kept in touch for all those years, and Maura would have to head to Leap, Ireland to find her. A leap it was, a leap of faith with a dollop of stupidity thrown in for good measure, but she was going to go.

Sullivan's Pub didn't look like much, but that's where Bridget told her to head to. Rose Sweeney, a young girl scrubbing down the bar, soon recognized her as the American who had come to visit. Maura was a bit surprised to see someone so young in a pub, a gal who quickly filled her in on things she needed to know. Ellen Keohane would be her landlady, for what she thought would be a short stay in search of her heritage, a homage to Gran. Even for a place as small as Leap, the pub was unusually quiet, but appearances were deceiving and a freaky discovery would soon liven up Sullivan's.

Leap was a place where they knew her past ... a dead father and a mother who abandoned her to Gran. Bridget Murphy had loaned her a car, but Maura was held up when people and cars clustered near a field. Sean Murphy, a young policeman, approached her stalled car, asking if she needed assistance. Maura asked him what was going on and he tersely replied, "They've found a body in the bog." Sullivan's began to fill as townsfolk gathered to speculate and gossip. It was so full, she went behind the bar to handle the Guiness in order to help Rose. The gossips would have even more to talk about when a mysterious letter surfaced in Old Mick's belongings. Just who was the Bog Man and what did all this have to do with her? Apparently someone thought it did when they hit Maura's car, forcing her off the road ...

This new series has just the right flavor of Ireland and its deep, dark mysterious past. Apart and aside from the mystery, I quickly became acquainted with a side of Ireland I didn't know existed. For example, the difficulty genealogists face with multiple names that are the same and the reason behind this mini-conundrum. Maura, who at the age of twenty-five, is somewhat younger than most cozy mystery sleuths, something that gives room for her charm and character to grow. The possibility that the Bog Man could be a crime victim or simply a part of history was intriguing ("Twenty years, two hundred, two thousand?"). It looks like Maura will have Sean Murphy and Detective Chief Superintendent Patrick Hurley to deal with in the future, and I'll be anxious to see what kind of trouble she'll be getting herself into!

Quill says: The mysteries of old Ireland come to life in this marvelous new series!