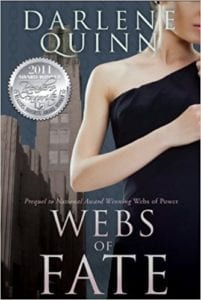 This novel is a prequel to Darlene Quinn’s previous novels; Twisted Webs and Webs of Power.This time around, the period is the 1980’s; the decade before home foreclosures became the norm. Money was a lot more plentiful then, and big department stores such as Bentleys Royale offered items of pure class and wealth, beyond shopper’s wildest dreams. The magnificent store was complete with all kinds of specialty items, tea rooms, restaurants and acres and acres of goods that enticed rich and poor alike to spend their money. In fact, the novel will bring back memories to all readers of how it was to shop in luxury - remembering the smell of expensive perfumes and fresh leather goods.

In the beginning of our story, Danielle Norman, a young buyer working for the Bentleys Royale department store in Los Angeles, comes up missing after a meeting in the President’s office. An enormous cast of characters - some who worked with her and others who were just acquaintances - search for Danielle and try to figure out why she disappeared…if she did. They come up with many reasons for her disappearance, most of which are illegal.

The main character in the novel is Ashleigh McDowell, Bentleys Royale Director of Human Resources, and she is also a very close friend and mentor to Danielle. Ashleigh's entire world revolves around her job and she is conflicted between her loyalty to the store and her relationship with Danielle. The plot develops at a steady pace, adding characters to the story, including Ashleigh’s fiancé Mitchell Wainwright; David Jerome, President of Bentleys; Bentleys Vice President, Conrad Taylor, and Director of Asset Protection, Ross Pocino.

Most of the background for this novel is the department store, itself, but this is not the only part of the story. The main plot and sub-plots are full of twists and turns including: kidnapping, family secrets, and romance - just to keep the reader even more intrigued. (Much like Jackie Collins’ famously fun books).

No Walmart or Walgreens here!! The author keeps the multiple plots going and that is no mean trick. Also, all loose threads are tied up before the ending, even though she leaves just a few threads dangling for the next in her series.

Quill Says: A great tribute to some of the old department stores; readers will wish they, and the size of their paychecks, were back.