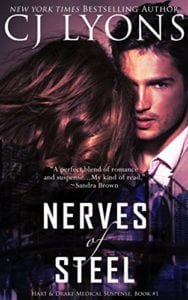 C.J. Lyons is an absolute mistress of suspense. With each and every book she ‘gifts’ to the masses, the plots, characters, and mysteries that she writes are so elaborate and well told, that there’s absolutely no way to put one of her novels down.

With this story, we arrive in Philadelphia on a cold, rainy evening with a huge storm about to unleash itself upon the rescue helicopter that Cassie Hart is flying in. Cassie is a doctor on a rescue call made to Three Rivers Hospital about a young girl who has been found in the Ohio River. Although Cassie feels like she’s about to die in her metal coffin that’s bouncing between the huge steel buildings, she is always the first to do her duty and wants to do anything within her power to save this young girl with no name.

When ‘Jane Doe’ is wheeled to her room in a coma, Cassie heads straight to the police station. It’s been found that the girl suffered from an overdose of the latest drug to hit the streets - FX. Not only is Cassie sick of FX taking the lives of so many in Philadelphia, she also discovers that the plastic bag of deadly pills found on Jane Doe’s body came from the pharmacy at Cassie’s very own hospital.

Enter…Detective Rembrandt Michael Drake, who goes by plain, old Mickey. Mickey has been on the FX ‘case’ for a long time, trying desperately to bring down one of the famous FX dealers, Lester Young. When Young dies without giving Mickey the information he needs, Cassie Hart suddenly shows up in his station with a plastic bag full of FX…and a story he can hardly believe. Getting an undercover job at the hospital, Mickey delves into what’s actually going on at Three Rivers, and tries to find out if Dr. Hart is the good soul she seems to be, or the “bad” guy he’s been searching for.

As Mickey is slowly drawn to Cassie, he seems to be the only one who believes in her innocence. Seeing as that every time Cassie is in a location, someone dies - Mickey takes it upon himself to not only solve the crime, but protect Dr. Hart from the others in his department who wish to put her behind bars.

Add in Cassie’s crazy ex-husband who has been released from rehab and reinstated at the hospital; a dealer who is impossible to catch; an officer who wants Cassie to know Mickey’s horrific secret; and, a wealthy family who seems to have ties with everyone from drug dealers to shoddy lawyers, and this becomes one of the best suspense plots ever created.

C.J. Lyons does an outstanding job of leading the reader through fast-paced scene after faster-paced scene, and tossing in a passionate romance to boot. This is one fantastically twisted, thrilling book readers will never forget.

Quill Says: Trust no one and assume nothing in this ideal suspense novel!