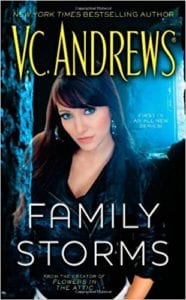 As all true fans know, V.C. Andrews was an American novelist who had the amazing ability to combine Gothic horror stories with family sagas, and turn them into some of the most beloved books in the world of fiction. Almost everyone you ask can remember the Flowers in the Attic series that told the fascinating tale of four children locked in the attic of a wealthy Virginia family by their overzealous, religious grandmother. Unfortunately, in 1986, V.C. Andrews passed away from cancer, leaving a huge hole in the writing world - that no one has yet been able to remotely fill. From that time on, the family hired a ghostwriter to not only continue and finish the books this incredible woman had started, but also to continue with series’ in the same “mold.”

This is the first book in a brand new series that follows the same formula V.C. made popular. Sasha Porter is a fourteen-year-old girl who has seen some truly hideous things. She loves her mother, but her mother has become an alcoholic, jobless, and she and Sasha mainly live on the streets, eating out of garbage cans. Worse? The depression of having her husband walk away and leave she and Sasha in the dust, as well as their horrific situation in life, has caused Mom to go a bit crazy - which is why she walked out into the dark, rainy street that night with her daughter where they were both hit by a car.

When Sasha wakes up in the hospital, she finds that her mother is now deceased, and she is on her own. Letting the darkness take her, Sasha is extremely surprised when she next wakes to find herself in a private room, with a private nurse, and a woman by the name of Mrs. Donald March telling her that she would like to adopt Sasha and bring her into her wealthy family to make up for the accident. Turns out, Mrs. March’s oldest daughter was the one driving the car, drugged out of her mind, that took Sasha’s mother away from her.

Taking the March family up on their offer, Sasha soon finds out that the mansion and money are not all they’re cracked up to be. Mrs. March lost her youngest child, Alena, to leukemia and seems to want to replace that child with Sasha. Placing her in Alena’s room, buying her clothes that Alena loved, making her Alena’s favorite meals, etc.

Not only is the atmosphere more than a bit freaky inside the tremendous estate, but the older sister, Kiera, who hit Sasha and her mother that night, is a real snooty pain. She hates Sasha, and will make sure Sasha does NOT take her place in the March family. She will do anything to stop that from happening…and, I mean, anything!

Family Storms is a fine and entertaining book. It still uses the same ‘type’ of premise that made V.C. Andrews a star. But readers will always know and see the difference between ‘before Andrews’ and ‘after Andrews.’ That woman could write!

Quill says: Although her spirit and name are being kept alive, you can’t help but miss the original!