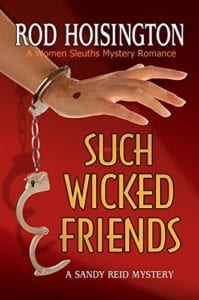 Creeping through dark courtyards was not how Sandy Reid intended to begin her law career. Fresh from the bar exam, she planned to leave her days as a sassy, devil-may-care law student behind for a more responsible approach. But she is obliged to meet a shady, unknown client - a woman who claims to be a victim of blackmail - as a favor to her friend and mentor Martin Bronner.

Unfortunately, when the client is located, she is unable to talk due to a bullet hole in her forehead. While checking for a pulse, Sandy notices a manila envelope on the victim’s lap and wonders if it contains the indecent photos that the victim wished to keep private. In a moment of sympathy, Sandy picks up the envelope, but immediately thinks better of it and puts it back…a moment too late. Naturally, due to her sassiness, Miss Reid has already run afoul of State Attorney Lawrence Moran in her previous adventures, and he relishes the thought of having her disbarred as soon as possible.

It gets worse. Soon after, Martin’s friend Brad shows up at Sandy’s office requesting confidential assistance. Brad plans to commit suicide and wants to enlist Sandy’s help getting his affairs in order. The following week, Brad is indeed found dead in his home...but is it suicide or cold-blooded murder? And where does confidentiality end and tampering with evidence begin?

Such Wicked Friends is the third installment of Rod Hoisington’s series about the exploits of sassy-investigator-turned-sassy-lawyer Sandy Reid. She’s not afraid to take on the big boys. She gets shot at a lot. Did I mention she’s sassy?

However, it is worth pointing out that her sass in this book results directly from her desperation to cover up her own bad choices, and after the third or fourth time, “irrepressible” starts to sound a lot like “annoying.” Sandy Reid is an intriguing character with interesting possibilities - it remains to be seen if Hoisington can develop her personality in a way that is both intelligent and likeable. Gaps in Sandy’s knowledge are filled in by her police detective boyfriend and the aforementioned mentor Martin Bronner; it’s a functional cast, but sometimes leaves its heroine appearing to have more guts than brains. Fans of the ever-snarky Brenda Johnson (played by Kyra Sedgwick) on TNT’s crime drama The Closer will no doubt enjoy Sandy Reid’s witty repartee, but one person’s leap of faith is another’s unsubstantiated accusation.

The story’s plot is clever and well thought out, weaving together seemingly unrelated stories in a believable way. Foreshadowing is a challenge for every mystery author, and Hoisington is developing his skills nicely in this important area. The characters are well-rounded but just one-dimensional enough to assuage any feelings of guilt the reader might have in jumping to conclusions concerning their ability to commit murder.

The palatable length, entertaining dialogue, luxurious tropical scenery, and occasional steamy-yet-tasteful references in this mystery make it an ideal page turner for a day at the beach. Also included in this volume is an excerpt from The Price Of Candy, the first book in Rod Hoisington’s Sandy Reid series, should the reader wish to read more about her sassy exploits.

Quill says: Like a slick TV crime drama, Such Wicked Friends is a satisfying diversion that wraps up neatly with just the right amount of fluff along the way.