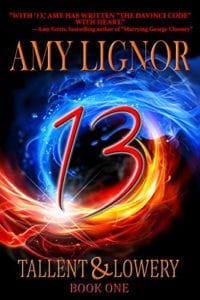 Leah Tallent is in love. She's in love with the New York Public Library. The young librarian loves everything about the library - the building, the history, the two lion statues guarding its entrance and the books. Oh, those glorious books! Leah lives for the days when she can spend time with her beloved books and has a talent for absorbing their knowledge like a sponge. In fact, she's read, and remembered, so much that she is truly a walking/talking card catalog who can extract a myriad of information from all the books she's read at the drop of a hat.

What Leah Tallent doesn't love are the hoards of obnoxious students who come trashing through her beloved library on a daily basis. These kids don't appreciate the amazing history found within the walls of the library - do they even read? - and Leah hates nothing more than having to spend time with the bratty school children. So when a hunky substitute teacher walks in with his class, Leah wants to run the other way. She quite happily lets her colleague Skylar go in for the kill. But Gareth Lowery, the gorgeous, blond haired, green-eyed teacher is apparently only interested in Leah. Leah, however, gladly leaves him and his hoard to concentrate on her work.

Leah, alas, has not seen the last of Gareth Lowery. Next, he shows up at a Library fundraiser as a very important, very rich, benefactor. Leah's boss enlists her help to give the donor a VIP tour, which she reluctantly agrees to. While she doesn't particularly care for Gareth, his friend Donovan Barker truly makes her flesh crawl. After giving Gareth the brush off yet again, Leah comes face-to-face with him in a rather unexpected place - the basement of the library.

The unexpected meeting in the library basement, in which Leah finds herself tied up and seething with anger at Gareth, slowly turns into a heated, and intense, discussion of Heaven and Hell. Gareth insists that he is in the midst of solving the world's greatest puzzle and by finding twelve keys based on the twelve astrological signs, will soon find the entrance to Heaven. Leah's curiosity is slowly piqued and, against her better judgment, she agrees to help Gareth.

As Leah delves further into Gareth's quest, she learns that there are twelve orbs, hidden around the world, that represent the twelve astrological signs. Six of the orbs represent the good of Heaven, and six represent the evil of Hell. All twelve are required to solve the puzzle. Gareth has already found six of the orbs, but he needs Leah, and her card catalog mind, to find the remaining orbs. Together they embark on a quest that takes them to California to Sarah Winchester's mansion, said to be haunted by the spirits killed by Winchester riffles. From California, the pair head to England to explore the spot where Jack the Ripper killed his last victim and then on to Loch Ness to the house of Aleister Crowley, the founder of a rather odd religious philosophy. Through each search, the clues and the orbs' hiding places are all connected to the number 13. What is the meaning of "13" and will it lead somehow, to finding the entrance to Heaven?

This first in a planned seven book series is an absolutely must read thriller. The action starts within the first few chapters and doesn't let up until the very end. The really fun part is that the author has used real places in her story, and if she hasn't visited each one, it sure reads like she has. Details were so perfect that you could heard the creak of the floorboards in Sarah Winchester's home and smell the musty dankness in Aleister Crowley's basement. Be sure to keep your computer handy as you'll want to look up each of these places and learn more about their creepy history.

Lignor keeps the pace moving at a brisk rate, helped along by the snappy dialog that brings the characters to life. Leah was a standout and while she hated Gareth from the get-go, you could feel the heat building between the two. It added a bit of spice to an already great mystery.

Quill says: Tallent & Lowery: 13 has it all - suspense, mystery, action, a little history, hot and sizzling romance, and great characters. Read this book before the movie comes out because if a studio doesn't pick it up, they're missing a great one.