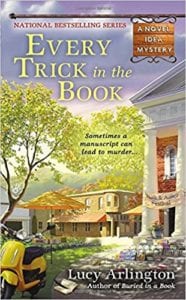 Lila Wilkins's pink slip from the "Dunston Herald" looked like a doom and gloom situation at the time, but that tacky cliché, when one door closes another one opens, gave her the opportunity of a lifetime. She ended up working for the "Novel Idea Literary Agency" and was loving it. Lila would soon be thinking of another superstitious cliché when she shattered a mirror. Seven years of bad luck was sure to head her way. Not. Her mom, whose "lifetime beau, Mister Jim Beam," was of another opinion altogether. "You're wrong, Lila. This is only the beginning." It was a mess, but other than that, it was nothing more than a simple accident and shards of glass certainly couldn't portend her future.

Inspiration Valley would be the home of the "Book and Author Festival," but the agency was in dire need of an intern. As luck would have it, Vicky Crump was self-confident and "possessed all the authority of charisma of Napoleon" so Lila hired her on the spot. As a one-time feature reporter Lila was fully capable of handling most anything thrown her way, including "flamboyant" clients like Calliope Sinclair who insisted on having their way and hopeful ones whose pitches were somewhat odd. Lila told her good friend, Makaya, that she'd have to "turn down dozens of them" at the book festival, but little did she know that the words "publish" and "perish" were going to go hand in hand.

Lila was stunned to find Melissa Plume, a senior editor for Doubleday Books, at her registration table. She was her "twin" in almost every sense of the word and the "overall resemblance was extraordinary." Once Lila started listening to pitches, things got particularly disquieting when a "sinister looking man" dropped a raven feather on her table and rushed away. Little did Lila know, it was only the beginning of a most unusual nightmare. It started when she and Sean were staring at Melissa's lifeless body in a deserted corridor. "Why? Why is she here?" She was determined to find out, but before she barely started, a "harmless murder mystery writer" was struck down in her own home ... it was one of Lila's authors!

Lila Wilkins finds herself in double trouble when an editor and author get bumped off. This mystery was intriguing in more ways than one. Lila gives us some insight into the real-life workings of a literary agency and why aspiring authors are so often rejected. She wasn't always cool, calm, and collected, but definitely determined to find out whodunit. Following the clues she finds in front of her, as well as those in a manuscript, made reading especially fun. Lila senses that the two murders are connected, but who, what, when, where, and how is only something a literary agent can figure out. No doubt, this is a novel new series that will keep me looking for more!

Quill says: This new mystery series is definitely one to watch out, especially when a little thrill is added to the cozy recipe!