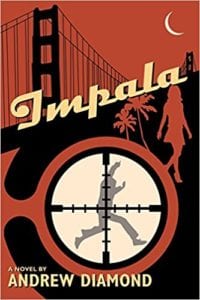 A computer hacker trying to make good by staying on the 'straight and narrow' gets dragged into a high stakes mystery of trying to find the "key" that is, literally, the key to vast sums of illegal funds. Along the way he is followed by some seriously bad guys, and meets a woman who may just change his life for the better...or is she really out to get him too? This is the premise for Impala, an action-packed computer hacker mystery that I read in record time.

Russell Fitzpatrick knows his way around computer code. In a previous life (four years earlier), he and a few friends did some illegal hacking that drew the attention of the FBI. After being forced to help the agency, Russ had had enough of hacking and tried to lead a normal life. He found a relatively boring job, working for a small software development company. Now, his biggest challenge is to stay awake during his software presentations to clients.

Unfortunately, Charlie, who was always the instigator in all those hacks, had other plans for Russ. Before he careened off a cliff in Bogota, Colombia, and got himself killed, Charlie created an encryption key that allowed the user of said key to get a whole lot of Bitcoin funds that was worth millions of dollars in the real world. The Bitcoin came via The Twilight Bazaar, a very illegal cyberspace place where heroin is bought and sold. Of course with so much money at stake, there are some very unsavory criminals who want to get the key - and are convinced that Russ knows where it is. Before Russ realizes what's happening, two nasty Colombians, as well as some beefed-up Russians, are chasing him, and beating him up, every time they find him. Poor Russ doesn't just have those criminals after him...the FBI wants to talk to him, again, and his girlfriend just dumped him too.

Russ, a very gifted computer "genie" (Charlie's nickname for him), decides that he's not going to go down without a fight. The only clue he has to finding the key is a Craigslist ad that Charlie had arranged to post upon his death. Along the way, Russ meets Cali, a beautiful young woman who Russ believes to be his soul mate. But is she really in love with him or just trying to get the key like everybody else? The tensions run high as Russ tries to stay one step ahead of the bad guys and the FBI, although he doesn't always manage to avoid a fight.

It took me exactly four pages to get drawn into Impala, and once caught up in the story, I couldn't let go. Told in the first person by Russ, I found him to be a very likeable protagonist. Frequently self-deprecating, often funny (when talking about his new love Cali, "I am not Mr. Smooth. The way I'm acting right now, I'm halfway between Mr. Lost and Mr. Restraining Order."), the author does a great job of bringing Russ to life and getting the reader to root for him. The author, a software engineer, shows his expertise with computer code as he guides the reader through some fascinating computer lingo and hacking tricks in an easy-to-understand way. I didn't just enjoy a good read; I learned a few things about computer hacking too.

Quill says: A fast-paced, can't-put-down suspense story that will keep you guessing along with Russ as you try to solve the mystery of where/what the key is and beat the criminals to that stash of money.

For more information on Impala, please visit the book's website at: adiamond.me/books/impala