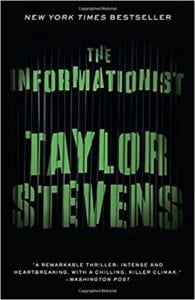 Before starting The Informationist, I read a bit about the author, Taylor Stevens. She was born into a religious cult and raised all over the world before she broke free. Also, in her dedication she wrote "To my fellow childhood survivors -- you know who you are." After reading this, I didn't quite know what I was getting into but, imagine my pleasure, when I realized that this book is a page turner that you don't want to miss.

Our protagonist, Vanessa Michael Monroe is The Informationist. She works amassing information for clients, corporations and anyone else who has the cash to pay for this type of knowledge. She was born in Africa to missionaries and when she was quite young she followed an outlaw arms dealer and his motley crew into the jungles of Africa. During the teachings of this gunrunner, she learned how to gain the respect of the most dangerous people in the lawless section of Africa and made her own reputation until something sent her on the run. Vanessa built a new life in the United States and built a new career, with the help of her best friend Katherine Breeden, a marketing consultant and her mentor, who sends her out on assignments around the world.

An oil millionaire from Texas, Richard Burbank, wants to hire Vanessa to find his daughter who came up missing in Africa four years ago. She really is not enthusiastic about this as she is not in the business of finding missing persons. Her business is finding information for corporations and governments for a great deal of money. As Vanessa reads a report sent to her by Miles Bradford, a professional security man for Burbank, she can't help herself and wants to accept the challenge of finding this missing girl. So, she returns to the land of her birth where all her trials and tribulations come back to her. She has to accept the fact that Miles Bradford will be babysitting her at the behest of Burbank and doesn't like this one little bit. She comes in contact with some of her former friends and enemies and she hopes that the devils that she had to contend with in her youth will help her now.

This book is, as I said, a real page turner which I read in two sittings. The beginning of this novel starts out with a bang and just gets better and better as the pages fly by, building to an ending that readers will not forget.

Quill Says: Go for it!!! You will not regret picking up this gem and - good news - there's going to be a sequel. Vanessa Monroe is a definite keeper and she is so good at her job that you never see her coming and she is gone before you realize she was there in the first place.