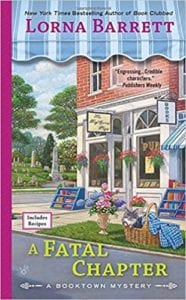 Stoneham just wasn't the same after Tricia's bookstore, Haven't Got a Clue, burned down. The only mystery in her book was when the insurance claim would be finalized and paid. In the meantime, Bob Kelly was pestering her to buy the building. With what, her looks? In the meantime, Tricia Miles was volunteering her time at the Chamber of Commerce. Her sister, Angelica, was the president (of course), a fact that made her enforced exile a tad easier. In spite of all the support she received, Tricia was finding herself "growing depressed" and would like nothing better than stocking mysteries with Miss Marple underfoot. Stoneham's Queen of Mystery would soon have reason to forget about anything commerce or claim related.

Grabbing a doggie doo bag and heading out for a walk with Sarge would be relaxing, but Tricia immediately noticed something was amiss. The flower baskets along the street had practically been picked clean, but that was nothing compared to what she spotted next. "Well, you're not known for finding live bodies," reporter Russ Smith quipped where he arrived on the scene. Well, Pete Renquist wasn't exactly a corpse when she spotted him lying facedown in the gazebo either. In fact, they practically had an arm wrestling match when he grabbed her arm in a death grip-like vise. Russ even threw out a few last words for Tricia to think about. "I never missed my little boy." Excuse me?

When Pete was hauled off to St. Joseph's Hospital and the rubberneckers left the scene Tricia would have plenty to think about. It would be one of those causes unknown sort of things and no matter how one phrased it, Pete was deader than a mackerel on ice. Murdered. There was a "suspicious bruise and a puncture mark on Pete's right arm" that didn't get there by themselves. Naturally Chief Grant Baker was going to want to hear how Tricia just happened to be at the scene of the crime holding Pete's hand. Pete may have been harboring secrets of his own, but so was Tricia.

Tricia was hot on the trail of the "late night petal-pincher," but couldn't seem to decipher Pete's cryptic message. Toni Bennett was overly boo hoo sappy at the funeral and her husband, Jim Stark, was mega-mad. Can you spell a-f-f-a-i-r? Funerals are great places to ferret out murderers, but Pete was such a flirt it could have been half the population of Stoneham. "Did you hear what happened last night?" Pixie spouted out. There would be one less person on Tricia's whodunit list because someone with a fractured skull wouldn't be talking any time soon. One plus one equals two, but nothing seemed to add up for Tricia. Had she lost her sleuthing ability or was she losing her mind?

Everything seems to be coming full circle in the Booktown Mystery series and this one will blow the reader out of the water. A secret has been harbored in Stoneham that went totally over my head, something that few readers could see coming. Hercule Poirot, yes, me ... no. The late night petal-pincher mystery was a great diversion that kept me from pinpointing the true murderer. Tricia, as Pixie describes her, is a "stand-up chick" and one of my favorite female sleuths. Because of the unfortunate demise of Haven't Got a Clue in the fire, Tricia is at her lowest, most vulnerable I've seen her in the series. However, if you like the Booktown series, this fatal, final mystery shows Tricia Miles, a stand-up chick at her best!

Quill says: Lorna Barrett, a cozy mystery queen, just might have been writing with a perfect pen when she wrote A Fatal Chapter!