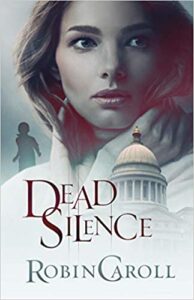 Dead Silence has a dash of politics, a sprinkle of who done it and a whole lot of adventure making it a must-read this summer.

Elise Carmichael is a widow and mom to a young son who is deaf. She is an attorney and works for the court system as a sign language interpreter and happens to be darn good at what she does. Perhaps she’s a little too good. As Elise wraps matters up at the courthouse one day, she happens to glance at the two men off to the side. One is talking on his phone and after her brain registers what his moving lips are saying, she cannot believe what she has witnessed. It would seem the stranger on the telephone is discussing an attempt on the life of her mother-in-law, Lillian York. However, Lillian is far more than Elise’s mother-in-law. She also happens to be an Arkansas State Senator. As unsettling as what Elise witnessed, the matter will have to wait given the disturbing phone call she receives seconds later.

Elise absently files the phone incident concerning her mother-in-law after receiving the call from Hallie, her son Sawyer’s caregiver. Sawyer took a fall while at the park with Hallie and they are on the way to the hospital. It’s normal for little boys to fall and get cuts and bruises, but Elise is distraught. Sawyer isn’t like most little boys. He was born deaf and her fear that he may have sustained a head injury or even worse, has Elise completely off her rails. Fortunately, Sawyer’s injuries aren’t catastrophic, but they will present a challenge. He has broken his wrist and will be in a cast for a while which will force some creative signing measures. By the time mother and son get home later that evening, all Elise can think about is getting Sawyer settled before she does the same. The next day is brighter and Elise is ready to take it on. She flips on the tv, turns up the volume and continues to her walk-in closet to get ready for the day ahead. Just as she finishes getting ready for work, breaking news stops Elise in her tracks. The memory of what she witnessed the day before comes flooding back to her. The tragic death of her mother-in-law is announced, and Elise will soon learn that this is just a sneak preview of the devastation and danger headed her way.

While I’ve not had the pleasure of reading any of Ms. Caroll’s previous books, Dead Silence was a great introduction for me. There is a distinct "must" when writing a murder mystery. In order to engage with your audience, a body must be delivered and the earlier, the better. Not only did Ms. Caroll provide the necessary body, but she continuously ramps the story page upon page thereafter. There are ample twists, turns, surprises and aha moments in this book to maintain a constant connection. The dialogue is believable. The character development has depth and the story line has a great flow from beginning to end. The element of suspense and seeds of doubt Ms. Caroll plants throughout are wonderful. One might think he/she knows what’s coming next, but Ms. Caroll is prepared with yet another ‘gotcha’ at precisely the right time.

Quill says: Dead Silence is a fast-paced, thrilling adventure of who done it from beginning to end.