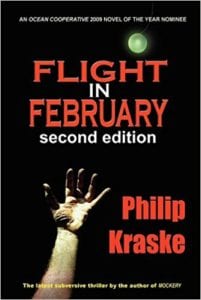 Marcus Aaron Strenk was through with counting sticks on a wall. He was out, out, out, but still had to contend with the blizzard swirling around him. He need only cross the road in front of him and he would be a free man, forever free from the depressing prison life in Stillwater, Minnesota. It was an underground prison from which escape was considered to be an impossibility, but “In fact, he had always been working toward escape, from the moment they photographed him for the mug shot . . . ” (pg. 96) He had been observing, waiting and watching for twenty months and the time had come. It was a fire and ice escape from a prison he never should have been in. He slowly collected the trash, placing little, seemingly inconsequential bits of material in the bin. Marcus slowly moved toward the open door. He knew that there were “intervals between bursts of flame” and hesitated. He suddenly disappeared from sight and plunged into the furnace below.

Buck Higbee was the last man to see Marcus alive. His rotund cellmate was devastated when a suicide note was found. It was Deputy Marshall Henry Scott’s call now, but after reviewing the video tapes there was definitely something amiss. Alec Barkley and Carlton Klinger, a couple of brazen, overly self-assured FBI agents insisted on putting the case to rest immediately. Suicide. “On the night of Wednesday, February ninth, Inmate Marcus Aaron Strenk took his life in an utterly unusual and dramatic manner, which has the profoundest ramifications for security personnel nationwide. ” (pg. 30) Yet these high mucky mucks found with eighty-five percent certainty there were no human remains in the furnace. Henry was forced to sign off the case declaring that Strenk had thrown himself into that furnace never to return, but the grating had been eaten away by acid and something about those videos didn’t look quite right.

No, nothing looked right or was right. Marcus, a one time cocaine trafficker for Billy DeMayo, “The great cocaine kingpin,” didn’t warrant this kind of attention. Henry looked at the agents and said, “Well, if this is all so simple, may I ask why two valuable Washington narcotics agents are here taking up the taxpayers’ money?” (pg. 166) Indeed. Mookie Morton, another inmate, began to sweat it when a postcard arrived from the outside addressed to Buck. Marcus let them all know he was alive and moving. The Sixto drug cartel began to take action and hammer on the DeMayo organization. The Invisible Hand, “representatives of a Mexican drug cartel,” were surfacing, making themselves known. The more Henry looked, the stranger the scene appeared. There was a hundred-thousand-dollar reward for Strenk that suddenly surfaced and he began to spout, “One day they’re ramming a suicide report down my throat, the next they’ve got the guy on the Ten Most Wanted List!” (pg. 237). What was Operation-Whiteout? Why was everyone so interested in this little punk? Everyone from the lowlife gangs in the prison to the top agents in the FBI were unsettled, but why?

This fabulously complicated cliffhanger is the type of speculative thriller that the best of movies are made of. It is not molded in the Hitchcock genre, but rather that of Harrison Ford, an action-packed book that almost makes the pages perspire as the reader tries to figure out what will happen next. The subtle changes in the plot made me shift my sympathies toward Marcus and question whose side he was on more than once. This is a solid thriller, one that I picked up and put down, continually savoring the read. The reader will be hooked from the start when we see Marcus crawling through a blizzard with only a few feet between him and his freedom. The superbly crafted writing takes us through many highs and lows and we never quite know why such a peon as Marcus Strenk is the linchpin that holds everything together until the end, when everything falls into place. One of the more amazing things about this plot is the plausibility factor. Could this really happen? You’ll have to decide for yourself.

Quill says: If you like your books full of action, drama, mystery, and suspense, you need look no further than Flight in February. It’s a firecracker thriller from beginning to end . . . you never quite know what’s going to explode from one page to the next!

For more informatiion on Flight in February, please visit the author's website at: www.philipkraske.com