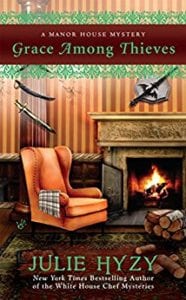 Emberstowne’s Marshfield Manor was once again quiet, exuding a more stylish and elegant aura. Grace Wheaton was back on the job as curator and manager of the estate, preparing to help Corbin Shaw produce a DVD touting the finer points of the North Carolina mountain manor. Advertisement was good for business, but corpses simply were not. Grace’s predecessor, Abe Vargas, and Zachary Kincade had been murdered in the manse and the last thing she needed to do was dwell on it. Detectives Flynn and Rodriguez, two of the worst bumbling officers the Carolinas had to offer, could manage without her assistance.

Bennett Marshfield, owner of the Manor, was quite fond of Grace, or Gracie as he preferred to call her. His demeanor was as elegant and appealing as his home, which in part served as a museum. A polite way to put it was that he was a “very upscale hoarder,” something that served the public well. The one thing that didn’t serve him well was his stepdaughter, Hillary, who used him for an ATM machine and a man-magnet. Whenever her toadies found out she wasn’t actually an heiress they hoofed it off like Secretariat at the Kentucky Derby. One horse’s patoot Grace was glad to get rid of was her former beau, Jack Embers. Least ways she pretended to be.

Grace had little time for “her highness” and her inane desire to be a movie star because John Kitts had a late-day tour arriving. Another thorn in her side was the mysterious disappearance of valuable artifacts from both the Kane and Marshfield manors. Grace would soon encounter yet another when Lenore Honore, an OCD member of the tour, decided to play touchy feely with Marshfield’s personal belongings...that is before someone decided to snap her neck and toss her down the stairwell. Apparently, it just wasn’t going to be her day. Frances, Grace’s decidedly disagreeable assistant calmly probed, “How come we never had any murders at Marshfield before you got here?” She couldn’t answer that one, but when she received a note claiming, “You’re dead. You just don’t know it yet,” she knew there might just be another murder at the Manor...hers!

Murder and mayhem at the Marshfield Manor is once again on Grace Wheaton’s to-do list. Murder, a deep dark secret, and a new romance turns this “Manor House Mystery” into a recipe for a decadently scrumptious southern special. The mystery had just the right touch of sophistication that fans of the series have come to expect with Bennett Marshfield and Grace on board. Hillary Singletary, Grace’s “nosy assistant,” Frances, Ronny Tooney, and the two Keystone Kops, Flynn and Rodriguez gave a nice, lightly humorous balance to the tale. The action cracked in all the right places with a little bit of romance to glue it all together. If you like your mysteries served up with a sweet southern style twist, amateur detective, Ms. Grace Wheaton, will gladly take you on a tour!

Quill says: Grace Wheaton is the type of sophisticated southern sleuth that cozy fans will adore!