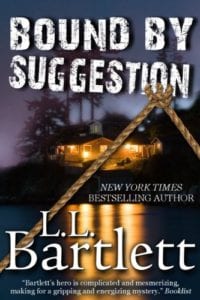 A feeling of dread swept through his body the moment he stepped into the apartment to search for little Eric. The touch of a hand would infuse Jeffrey Resnick with the feelings of its owner, but this room told him the story of this child. Jeff saw "A kid's hand reach for a glass," but what did it mean? It was a short trail of connections that led him to Paula Devlin's home in search of her son who had been missing for eight months. Jeff's half-brother, Dr. Richard Alpert, was Paula's internist and Dr. Krista Marsh was her psychiatrist and they had enlisted his help. A teenaged hoodlum cracked Jeff's skull wide open with a bat the year before leaving him with an unusual ability to "absorb emotions, interpret them," and a paranormal ability that was nothing short of freaky. Jeff was pulled toward the stairs in search of the four-year-old and soon the once scornful Dr. Marsh would be blinking in "confused revulsion." Eric had been found.

Jeff was in a funk because his girl, Maggie, had left him for her ex-fiancé, Doug, and he was in no mood for Krista's sudden interest in his "psychic gifts." Besides, he was feeling a monster skullpounder coming on, something that happened every time he used that gift, or curse depending on the way you looked at it. Krista was interested in getting him to help out with one of her patients, so he decided to relent and meet with her. Grace was wheelchair bound and was hoping that Jeff could use his ability to "feel emotions for people" to help her recover from past abuse and become whole again. The problem for Jeff was that he actually experienced what they felt and when he touched Grace he felt an "ugly, naked fear" course through his body. What did Dr. Marsh expect from him? How could he possibly help her?

Richard's life seemed so much simpler. The life of a "doctor" like him consisted of a few days at the clinic and vying with that twit Wes Timberly for a chairmanship of some dumb committee. Rich was golden and had it all, including Brenda, a beautiful woman who would soon have his child. Jeff felt like a loser whose only purpose in life was to hold a job as a bartender and get dumped by every woman he loved. The sessions with "Dr. Marsh" would soon begin and perhaps his touch and paranormal ability could be of some use. Little did he know that both would be used for someone else's evil intentions, revolting even him beyond imagination. Jeff was clueless and it didn't connect that doctors did not enlist the help of laymen to treat their patients. Brenda told him to watch his back because she was a trickster. He "flinched as a needle plunged into a vein" and a voice began asking him about Maggie. There were hints of murder and mayhem on the horizon, but this time his psychic gifts just might not be enough to save his own life, let alone anyone else's!

This fast paced paranormal thriller will keep everyone wanting to see a LOT more of Jeff Resnick. I immediately was drawn into this book and could almost hear the horrifying staccato violin notes wondering what was going to happen next. The opening scenes were a perfect introduction to Resnick and his unusual paranormal curse. Once this high point was reached the plot settled in quite nicely and all the previous characters in the series were reintroduced. Jeff is just a poor slob who many people can relate to on many different levels and he certainly is not one to rise above his misery because he definitely feels sorry for himself. Even his brother Rich had to admit that "When God handed out good fortune, Jeff got shorted." This is the second Resnick paranormal thriller I've read and each time I get deep into the plot I think classic noir and would love to turn on the television to see the conclusion on a cold, late night just before the static comes on the set. Of course those days are long gone, but somehow Jeff Resnick brings them back, at least on the page. If you love a good mystery, especially a paranormal thriller, this series is one you need to tune into!

Quill says: This fast paced paranormal thriller will keep everyone wanting to see a LOT more of Jeff Resnick!