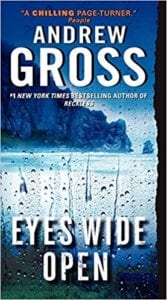 The master of the psychological thriller delivers yet again in this amazing new novel!

This unforgettable story centers around a man by the name of Jay Erlich. Many years ago, Jay’s older brother Charlie began a trek to California; Charlie was the poster-child for the sixties generation. His trek ended at the door of a man named Mal, who referred to himself as the master of the house. In what feels completely and utterly like the real story of the Manson Family, Charlie becomes an occupant of the Riorden Ranch owned and run by Mal, a deeply disturbed man who is the overlord of all he sees. Charlie becomes a part of that twisted community, and witnesses various events, causing extreme bloodshed that Charlie will never forget.

Charlie was one of the lucky ones, however. Even though he had other difficulties, Charlie did survive the horrific Ranch, grew up, and became a husband and father. Charlie and his wife Gabby are both bipolar; they each have a history of drug and alcohol abuse; they live in California as wards of the state, as well as their twenty-one-year-old son, Evan.

When a phone call comes into Jay’s household - which is NEVER a good call when it comes from his brother - the story takes off like a shot. Evan has been found at the bottom of a cliff, and Charlie’s demons are once again coming back to life. The history of the Riorden Ranch and the people who surrounded Charlie in the past are about to take center stage.

Jay gets to his brother as fast as he can, trying to help Charlie live through the suicide of his son. However, Jay soon finds out that suicide is not the cause, and he must soon put his own life on the line in order to uncover the truth about what happened to his nephew.

Each and every page of this thriller makes the goosebumps stand up as high as they will go. From the evils of the past that erupted in the sixties, to the unbelievable “madness” that envelops these characters as they walk down what feels like a path straight into Hell - Andrew Gross has left nothing out. He has, as always, written a superb novel full of fear, chills, and mind-games that are truly unforgettable!

Quill Says: Leave the lights on and the doors locked, because this is one novel that will scare the living daylights out of you!