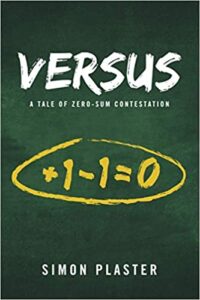 VERSUS: A Tale of Zero-Sum Contestation

From BOO! to Geezers to Brokla and beyond, I can explain my continuing recommendations of this author in four simple words: I love this guy!

It is not a shocker to see a review of a Simon Plaster book that includes the word “brilliant” or the phrase “the king of satire.” This is an author who takes on the hideous (and at the same time, ridiculous) subjects of today’s world, face them, fight them if need be, and leave the reader not only laughing but finally understanding what the s##t in this world is all about.

I became a huge fan of Simon’s series of standalones that feature small-town reporter turned detective, Henrietta, who was named after her hometown Henryetta, Oklahoma, when they first began. Personally, I think this woman is one character in fiction that the whole state of Oklahoma should bow to because she gives them definite flair.

Beginning on a Tuesday, readers immediately start having fun with the news that an election is on the horizon. (Goodness knows, we finally just got over the last one in real-life). Here, however, we’re talking a race for the Governor. Henrietta is at a point in her life where she’s happy. She is getting a solid paycheck for her work as a private detective, and her boss, Leroy “Lero” O’Rourke has a ton of work on his plate now that he became a “big name” in town for defending an illegal Mexican who was wrongly charged with murder.

Heading into her boss’s office, Henrietta is ready for her next case to be assigned. Opening the door, she first sees political campaign posters of the two men running for Governor. One depicts the Democratic candidate, Richard “Big Dick” Goodman; the other shows his opponent, Montgomery “Big Johnson” Johnson, who is a Republican all about family values. After seeing that, she is passed a file by Lero labeled Crammer vs. Crammer. This case she’s about to take charge of involves a ‘wronged woman’ and a bad marriage. And that’s only a sneak peek at the plot-filled party that’s about to commence.

We soon get involved with two lawyers sitting in their fancy offices on the 20th floor. One is Randolph McCoy who is part of the divorce lawsuit; the other is Andrew Hartfield – opposing counsel – who can be found in the building right across the narrow street. In fact, Hatfield and McCoy (don’t you just love that?) can see each other through their windows. These men are longtime rivals who work hard to one-up the other on a daily basis. Ever since grade school these boys have been competing in every avenue of life: from sports to board games; from making their careers a success to landing women, and earning the highest salary. They do agree on one thing, though: In this life, there was no such thing as a “tie.”

As this divorce case comes to pass, pitting a woman named Lilith against her estranged husband who just happens to be an extremely rich doctor who loves being at the top of society and being invited to any and all prestigious events, things get really out of hand. The doctor, by the way, is a die-hard Republican. Murder, of course, is a hot topic in this tale, and trying to figure out the ‘who, what, why and how’ is again one of Simon Plaster’s greatest gifts.

Not only is it a whole lot of fun to delve further into the Crammer matter, but readers will also be educated on organizations with names like, “Doctors Without Limits Political Action Committee” and the “Christian Family Circle.” (Think about those for a while.) It seems on every page there are people versus people, groups versus groups, and lawyers versus lawyers...everyone is battling. Henrietta remains the lone character with common sense (thank goodness) who can work through these ridiculous wars in order to solve every question that arises.

The culmination of the tale where a revelation is offered occurs during a high-brow golf tournament with the backdrop of a huge storm, and adds even more fun to the whole political enchilada. This author needs a fan club set up for him, PRONTO! (You can count on me paying annual membership dues.)

Quill says: So funny, you’ll wish that THIS was the election we had to deal with instead of the real one. This one was far more entertaining.

For more information on VERSUS: A Tale of Zero-Sum Contestation, please visit the author's Goodreads page at: Goodreads.SimonPlaster.com

VERSUS: A Tale of Zero-Sum Contestation

GREEZERS: A Tale of Establishment's Decline and Fall

TRACKS: A Curious Tale of Who's Her Daddy?

Flicks: A Tale of Cinematic Docudrama, Half-Truths and Half-Fictions

Spots: A Tale of Star-Struck Misfame and Misfortune

News: A Tale of Too Much Information and a Girl

One for the Ark

If You Lean In, Will Men Just Look Down Your Blouse?

Love By The Book

A Pinch of Ooh La La

How I Got Skinny, Famous and Fell Madly in Love

Goodnight iPad: A Parody for the Next Generation

Pride & Prejudice With a Side of Grits

I Just Can’t Take It Anymore! Encouragement When Life Gets You Down

The Pun Also Rises: How the Humble Pun Revolutionized Language, Changed History, and Made Wordplay More Than Some Antics

Just a Bunch of Crazy Ideas

Cure Your Democracy: The Infection, Spread and Treatment of Contagious Opinions

The Book of Eli

Confessions of a Househusband

Introducing the Richest Family in America

Two Gentlemen of Lebowski: A Most Excellent Comedie and Tragical Romance

What Makes Flamingos Pink?: A Colorful Collection of Q&A's For The Unquenchably Curious

Just Don’t Call Me Ma’am: How I Ditched the South, Forgot My Manners, and Managed to Survive My Twenties with (Most of) My Dignity Still Intact

Mr. Ed: Dead: And Other Obituaries of the Most Famous People Who Never Lived

When Did I Get Like This?: The Screamer, the Worrier, the Dinosaur-Chicken-Nugget-Buyer, and Other Mothers I Swore I'd Never Be

He’s a Stud, She’s a Slut and 49 Other Double Standards Every Woman Should Know

From Beer To Maternity

But Then Again I Could Be Wrong: The Book of Rants

How To Profit From The Coming Rapture: Getting Ahead When You’re Left Behind

The Melancholy Death of Oyster Boy & Other Stories

The Geography of Bliss