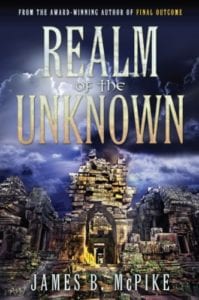 Realm of the Unknown is a fascinating story by James B. McPike, whose debut novel, Final Outcome, was an award winner. Like the first book, this one takes off quickly. In fact, after reading the three-page prologue, the reader will likely want to continue into this historical thriller without delay. Additionally, anyone really interested in religious history will get their adrenaline pumping by the end of the prologue and continue through to the last page without pause as they hunt for answers to the questions that arise as they read.

Vince Ramsey, investigator from the Ministry, is asked to investigate the killing of many people at a gathering in Israel. There seems to be no reason for this slaughter except many years ago, the same thing happened in Masada, Israel. Could the two events be related?

Vince goes to the crime scene and talks to some forensic experts who seem to think that the perpetrator of this horror is something or someone supernatural. Why? Because, they reason, no human could have done such a horrible thing. As Vince is leaving the site he finds a necklace that is very old. He decides to take the necklace to the Antiquities Authority where he meets historical specialist, April Fulton. They decide to work together to find out just what happened at Masada.

Vince and April soon learn that the necklace is linked to a secret society that was founded by a Greek philosopher. However, things are much more wicked and evil than they originally thought. They are now being hunted down at every place they go by assassins. What makes it worse (yes, it can be worse!) is that they don't know who the assassins are working for. What do they want (?), other than, of course, seeing Vince and April dead.

Starting with Jerusalem, at a museum where they are confronted by some rather unsavory people who threaten them to turn over the artifact, the pair continue their search for the truth. It's soon on to Florence, Italy to meet Henry Quinlan, who is an expert in some of the religious findings about the artifact. Unfortunately, the bad guys are there waiting for them. Finally, Vince and April travel to Paris to check on the grave of Nicolas Flamel, who was an alchemist and found the philosopher’s stone that would turn base metal into gold. They find that they are after a very powerful villain who can control a powerful force that is only known by readers of the Book of Revelation. Is it possible to stop this evil villain before it is too late?

Quill Says: Based on historical fact and very well researched, Realm of the Unknown will take the reader from Israel to Italy and France and beyond, as they join Vince and April on a desperate search for the truth.