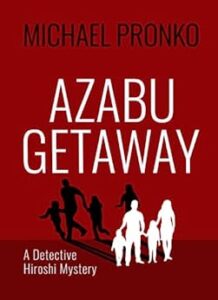 One of our favorite detectives, Hiroshi, is back in his fifth novel of the Detective Hiroshi series and, as always, he does not disappoint.

In this new story, after the murder of one of Tokyo’s important executives in a high-level money management firm, Detective Hiroshi finds himself in the middle of an investigation revolving around financial schemes among Tokyo’s exclusive and rich. Of course, it can’t be as simple as just the one investigation, because we then have a second murder and the kidnapping of two young girls. The parents of these two girls seem to have the perfect life, which quickly falls apart in the midst of threats and fear and confusion that they cannot begin to imagine. As the reader, we are shown that even when one is super rich, life can still be frightening and a challenge that must be faced head on.

So the big question is...are the two crimes connected? For that answer you will just have to read and watch as Hiroshi and his homicide unit try to solve murders and abductions while also being thrown deep into the well of financial greed, investments overseas, tax rules, and so on. In short, they now get to obtain a whole new education in the world of finance while also trying to do what they do best, which is solve murders. It really makes for fun reading and along the way we get to catch up with old friends and make some new ones in terms of the characters.

This fifth story in the series is as well-written and interesting as the first four. Mr. Pronko is an author who gives us well-developed and thought-provoking characters in a fast-paced and satisfying mystery. His crime scene descriptions are so vivid and polished and his ability to write about the techniques and steps in investigating the crime are written in a manner that makes it fascinating, rather than boring. In addition, the grasp of the culture of Tokyo that this author holds makes for excellent reading. You, as the reader, feel almost like you are there. I can give no higher praise than that.

The book is a fast-paced and exciting mystery that crosses with an honest glimpse of family dynamics and culture in Tokyo. The story can be easily read by someone who has not heard of the first novels in the series but I guarantee that you will quickly go back for the others. The series is definitely worth it and I would highly recommend the book to anyone who loves a good thriller.

Quill says: This is a series which only seems to get better from book to book and that is not, in my opinion, the norm. This makes the Detective Hiroshi series a stand-out among all the mystery/suspense series being offered today.