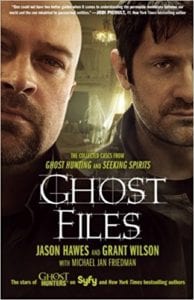 Ghost Files: The Collected Cases from Ghost Hunting and Seeking Spirits is two books compiled into one volume, making for an impressive collection of first-hand paranormal experiences. Jason Hawes and Grant Wilson, founders of The Atlantic Paranormal Society (T.A.P.S.) and stars of the popular Syfy show Ghost Hunters, have conducted dozens of paranormal investigations at purportedly haunted locations. Like the TV show, the books are divided into chapters focusing on individual cases.

The first book, Ghost Hunting: True Stories of Unexplained Phenomena from The Atlantic Paranormal Society,elaborates on the Ghost Hunters’ televised investigations. These include a theater, a lighthouse, a warehouse, and the USS North Carolina, as well as numerous homes, restaurants, and hotels. They have even explored the Stanley Hotel (inspiration for the horror classic, The Shining) and Sarah Winchester’s Mystery House (a familiar sight to anyone who has watched more than an hour of Syfy).

The format of Ghost Hunting is that Hawes tells the story and Wilson adds afterthoughts in a small text box, usually at the end. Hawes’ tone is casually conversational, and while diehard GH fans may appreciate commentary about the cast’s everyday lives and interpersonal dynamics, those more interested in ghosts than gossip may be annoyed by the frequent personal asides.

The second book, Seeking Spirits: The Lost Cases of The Atlantic Paranormal Society, discusses investigations that were not aired on television, including exorcisms, extraterrestrials, and chilling encounters with a doppelganger and an incubus, plus some cases that are decidedly not paranormal in origin. Hawes and Wilson divide authoring duties here, and the writing is more focused and on topic. Most chapters conclude with an informative “Ghost Hunter’s Manual” sidebar where the authors share their expertise on relevant topics like research, scouting locations, and capturing EVPs (that’s electronic voice phenomena, for those not familiar with ghosthunting jargon). Unfortunately, there is no index and the table of contents does not include chapter titles, making it difficult to reference topics on demand.

The volume concludes with a glossary and “The Ghost Hunter’s Manual.” Hawes and Wilson encourage people who are interested in paranormal research but can’t find local organizations to start one of their own. This straightforward manual is designed to assist independent researchers, with concrete start-to-finish guidelines on conducting an investigation.

The intent of T.A.P.S. is not to validate but to debunk reported hauntings. The theory is that what’s left over – in other words, what can’t be debunked – is the real thing and merits scientific attention. As stated by Hawes, the ultimate purpose of T.A.P.S. is to encourage acceptance of paranormal research as legitimate science.

Upon arrival in their mobile command center (i.e. van) they inspect the location for mundane explanations (handily, Hawes and Wilson are employed as Roto-Rooter plumbers). Then they turn out the lights and spend one or more nights creeping around in the dark and documenting their experiences with cameras, thermal imaging, sound recorders, and various types of meters including thermometers and EMF (electromagnetic field) meters. The collected data is reviewed to determine if the place is haunted and the findings are shared with the location’s owners or management.

But real-life ghosts seldom spatter walls with blood or kidnap children to alternate dimensions, at least not while cameras are rolling. Real-life ghosts are less dramatic – likely to manifest as an inexplicable shadow that suddenly vanishes or a noise that can’t be explained. Storywise, this book suffers from the same problem as most real-life ghost stories: unsatisfying endings.

Remove the dramatic license from a ghost story and often all that’s left is uncertainty. Many of these stories end with a hmm, not a bang, and readers whose expectations have been conditioned by Stephen King and Hollywood may be underwhelmed by the writers’ reluctance to draw definitive conclusions. Somewhere between “not enough documentation to say for sure” and “it could have been the outdated heating system” is a dimension where the reader remains forever haunted by the specter of a dramatic conclusion that will never be.

Quill says: An interesting read for Ghost Hunters fans and readers with an interest in paranormal research. Readers who prefer their horror yarns sans science may wish to seek a fictional experience.