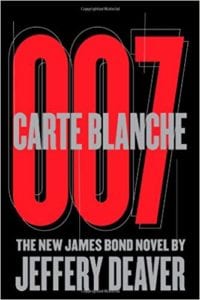 After a few tries, finally the James Bond people got this right. Ian Fleming Publications asked Jeffrey Deaver, a very accomplished action-adventure/suspense writer to take on this new novel, Carte Blanche. Mr. Deaver, a master of suspense has written one of the best (since Fleming) 007 adventures that will keep readers on the edge of their chairs. It's a masterful adaptation of the 007 persona. The book balances the tradition of Bond (very debonair, suave and a real ladie's man) bringing him into a new era. Gone is the Commander who met the Nazis face to face and all the weird folks who peopled the former Bond books. In this book, our James is a former Royal Naval Reserve Officer who has recently joined the Overseas Development Group (no more Universal Exports), a covert unit of British Security. James still has a boss named "M"; Miss Moneypenny is front and center; James drives a top-of-the-line Bentley, which, by the way, was written into many Fleming Bond stories; Mary Goodnight, secretary to the 00 section; Felix Leiter, old CIA pal and others who readers will recognize. Also, of course the license to kill which is now called Carte Blanche...

Great villians, in this case, Niall Dunne, "The Irishman," the ultimate bad guy and his boss, Severan Hydt, the owner of Green Way International, a waste disposal corporation who is obsessed with death and wants to detonate an extremely dangerous weapon of mass distruction in a British University. James Bond, in this volume is a veteran of Afghanistan. Also, he is much more of a team player than he once was. Despite some run-ins with Percy Osborne-Smith, a MI5 agent, he has become somewhat sensitive, which was not a quality enjoyed by the previous Bond.

Still, the hard-nosed Bond remains, but it’s a different world than it was in 1953, and the women in Carte Blanche are pretty much equal to the men. There's Ophelia Maidenstone, a coworker at ODG, who, besides being very beautiful, is indispensible and, without her, Bond would be dead in the water. When romance begins to bloom between them, she stays in Bond's mind so much that after a night with another beauty, Bond actually feels guilty. This was definitely NOT one of his traits in past books. This is very unlike the old James but, it's true to the Bond stories as it's just as exciting and full of danger as were the earlier books.

This author really leaves you wanting more Bond adventures. The novel will hold readers interests going into plots and sub-plots about Bond's life and readers will be looking forward to the next Bond installment, hopefully, to be carried out by Jeffrey Deaver.

Quill Says: Jeffrey Deaver, the latest author asked to write a James Bond 007 opus, is a wonderful choice. He remains true to the old Bond, including fast cars and women and also really nasty bad guys. Deaver has been able to bring James into the 21st century with a bang instead of a whimper.