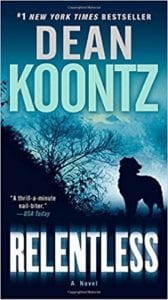 As the title suggests, Relentless is a book where the action picks up quickly and doesn't slow down until the very last page.

Cullen Greenwich is a bestselling author with the perfect life. He has a loving wife, Penny, also an author, and a six-year-old son Milo, a prodigy who, "...was chronologically six, intellectually twenty-something, and emotionally maybe ten or eleven." (pg. 124) And we can't forget Lassie, an Australian shepherd mix with personality plus. Cullen's newest novel, One O'Clock Jump has just been released and like his previous books, this one promises to be a bestseller. Life is good. That is until a scathing review comes out from Shearman Waxx, the esteemed senior critic from one of the nation's top newspapers. Cubby, as his friends call Cullen, tries to ignore the bad review and focus on all the good ones, but it's hard when everybody keeps reminding him not to think about the Waxx review.

When Cubby and Milo run into Waxx at a local restaurant, the real problems begin. After a rather odd bathroom encounter, where young Milo almost "sprinkles" Waxx, the critic walks by the author and says one word, "Doom."

While Cubby thinks the whole encounter strange, he's not worried until later that day when he finds Waxx in their house. Going after him, Cubby is unable to catch him and Waxx escapes, leaving no proof of his crime. Cubby thinks of calling 911, but with no proof, what would they do? But that night, Waxx enters their house again, tasering both Cubby and his wife. Again, Waxx gets away, leaving no sign that he had been in the house. Should they call the police? After receiving a call from another author who was also a victim of Waxx's wrath, who tells Cubby how Waxx killed his wife and two daughters, Cubby realizes Waxx isn't just after him, but also his wife and son. The police will never believe them.

Soon after, Waxx makes another appearance and the family barely escapes before their house blows up. Realizing they are in mortal danger, the family begins a terrifying ordeal of trying to stay one step ahead of Waxx, who, for whatever reason, is bent on killing the family. Traveling by car, switching cars, taking a bus, not using credit cards, going places they have no connection to should keep them safe, but Waxx has an uncanny ability to find them again and again.

The tension the author builds in this story, and the constant, fast pace, keep the story moving along quickly. Indeed, it's apt to be a book you'll read in one sitting, simply to find out what's up with Waxx. How does he do the things he does and more importantly, why? While the character of Milo gets a little annoying - he seems much smarter than a "twenty-something" and seems to grow smarter as the story progresses (perhaps because it was necessary to the plot for Milo to be very, very smart), the other characters were compelling enough to make me care about their safety. Lassie was perhaps the star, with her uncanny ability to crawl into tight spaces, stay hidden, and be perfectly happy about her cramped quarters when found. The ending may leave some readers a bit unsatisfied as it mixes elements of science fiction into the plot, and is something that's been used in numerous other stories, but overall, Relentless is a good, fun read that will keep you guessing.

Quill says: If you like your books to offer lots of action and keep you guessing, check out Relentless to see what awful things can come from one bad review!