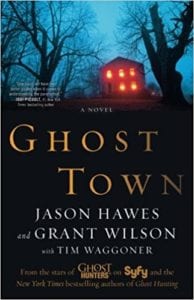 On the heels of Ghost Hunting, Jason Hawes and Grant Wilson strike while the iron is hot and collaborate with Tim Waggoner on their next paranormal novel: Ghost Town. The town is Exeter, the most haunted town in America and the story opens at the Forgotten Lore book store. Tonya Jackson, a college kid trying to make ends meet just wants to get rid of the last customer so she can get on to more important matters. Her friends are hosting a girls' night of tearjerker movies. However, until the annoying tourists make their purchase, Tonya is stuck and her patience is wearing thin. She hates October in Exeter. This is the month every year when the largest paranormal festival, Esotericon, invades Exeter. All it did for her was subject her to the craziest of the crazies in search of that opportune moment to party with the afterlife. Little did Tonya know it would be her last October in Exeter.

With their introduction of Tonya out of the way, Hawes and Wilson waste no time in shining the spotlight on three more characters: Amber Lozier, Trevor Ward and Drew Pearson. Fifteen years beyond high school, they reunite and return to Exeter to face down their demons. After a horrific experience thanks to their mutual interest in paranormal phenomena (and the burning to the ground of the Lowry House), it seems the plot is anchored for the story to take off. The event: Esotericon - an annual freak-fest frenzy for paranormal enthusiasts.

While the pace of this story doesn't necessarily drag, there is a fair amount of obvious cheekiness that tends to weigh it down in places. Some of the character descriptions; particularly Greg Daniels, are a little too overstated. Greg is a person from their past who has since passed over to the other side. When his spiritual self is introduced and resurfaces, his persona is overkill with his arrogant and know-it-all deliveries. Hawes and Wilson also spin a subplot of: does the guy get the girl the second time around when they introduce yet another character, Jenn Rinaldi, an Asian-American beauty who happens to be a former lover of Trevor's.

Even though the read itself is fairly fluid, there is a needless complexity throughout that is attributable to the overabundance of star characters. I found myself on more than one occasion pausing in order to refresh who was who and what their role was in the story line. The authors achieved what they set out to do in the writing of Ghost Town. It is a novel that plants the distinct question in the reader's mind of what goes on in life after death? I do have a fascination with that very wonder. However, I struggled with the premise because the writing jumped around among too many characters and the scenes didn't seem to flow in a natural progression before I was redirected to another part of town.

Quill Says: What does lurk on the other side?