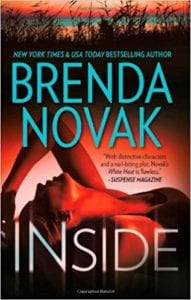 A new concept is born as bestselling author Brenda Novak writes the words that will have millions of fans once again clamoring for this title - the first in the new Bulletproof trilogy.

The heroine, Peyton Adams, is a Deputy Warden at a maximum security prison in California called Pelican Bay. In this first offering, Virgil Skinner has been released from prison after serving fourteen years for a murder he did not commit. While in prison, he became a member of a gang referred to as, 'The Crew,' just so he would be able to survive the horrific place. However, when Virgil is finally set free, he soon finds that he can't get away from the gang he joined; they are like the proverbial albatross around his neck. Members of 'The Crew' will commit all sorts of mayhem, including harming his sister and her children to keep Virgil from divulging all that he knows about the gang and their activities.

Enter The California Department of Corrections, who need someone to go inside the Pelican Bay Prison and join up with another gang called, 'Hell's Fury,' who have slowly taken over the state's most notorious prison and are responsible for the killing of a judge. Through various events that include Warden Fischer and our heroine, Deputy Warden Peyton Adams, and members of the Department of Corrections, Virgil is soon picked to be the 'mole' that's necessary to solve this problem. Of course, if Virgil is put into the high security prison, Peyton knows that it will be next to impossible to protect him, and she doesn't want him harmed on her watch. But Virgil is ready and he certainly looks the part. With bruises and scars that speak of many brutal battles, and the tattoos of love and hate on his knuckles, his appearance already screams out...CONVICT!

As you might expect, Peyton is voted down and Virgil goes into the prison under an assumed name (Simeon Bennett) in exchange for witness protection for himself and his sister. Peyton is worried about how she can protect him if he gets himself into trouble. But, the worst part? She also feels an attraction to Virgil that makes her all the more nervous about having him there.

Being classified as romantic suspense is a bit odd, seeing as there is far too little romance and far too much testosterone floating around. But, these two people definitely find themselves getting closer, and there are many thrills and chills included along with the prison gang plot. The story is definitely a nail-biting, white knuckle book, that will keep you on your toes until the very last page. Fast-paced and filled with a ton of action sequences, readers will follow closely as Peyton and Virgil attempt to become an odd yet, sensual team.

Quill Says: This new trilogy by Brenda Novak - an extremely high-caliber author - will draw readers in and keep them perched precariously on the edge of their seats.