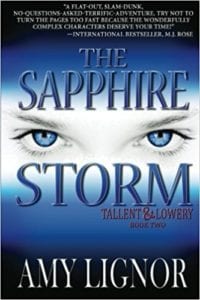 I was so excited to learn that book two in the ‘Tallent & Lowery’ series by Amy Lignor was near completion, and I knew I had to be one of the first in line to get my copy. Having read, and loved, the first book in this series, 13, I was anxious to see what was up with my favorite mystery-solving duo. I wanted to see what Leah Tallent and her hot and spicy romantic lead, Gareth Lowery, were up to, what great adventure the author would be sending them on, and whether they’d continue their super-sizzling romance. I’m happy to report that The Sapphire Storm does not disappoint – it’s everything I’d hoped it would be and then some.

As the story opens, we see Emmanuel Carrier, the boyfriend of Gareth’s sister Kathryn, somewhere deep within a rose-colored mountain, where he has discovered…a mighty weapon, an amazing artifact from long ago. But before Emmanuel can escape the cold clutches of the mountain, disaster strikes and he’s trapped, perhaps forever, with the artifact and the blazing, beautiful sapphires that surround him. That’s all we know of Emmanuel until later in the story…

As the reader re-unites with Leah and Gareth in the next chapter, they are about to start a truly terrifying adventure of their own – visiting Leah’s parents in Connecticut. While that visit goes pretty much as expected, it comes to an unexpectedly abrupt end when Gareth receives a call from his sister Kathryn telling him that Emmanuel has disappeared. Leah and Gareth immediately leave the winter chills of New England behind as they head for Los Angeles to meet with Kathryn.

When Leah and Gareth question Kathryn about Emmanuel’s whereabouts, the worried woman tells the pair about Emmanuel’s recent fascination with Francis Bacon, whether the famous English philosopher and scientist was really Shakespeare, and some odd connection to Athena, the mythical goddess of wisdom. Searching through Emmanuel’s journal, Leah and Gareth decide the best place to begin their search for the missing man is where Francis Bacon spent much of his time – Gray’s Inn in London.

While the pair, with Kathryn in tow, start their search for Emmanuel in London, it is only the first stop in the hunt for an extremely powerful, and in the wrong hands, incredibly dangerous, artifact. Without giving too much away, while boyfriend and artifact, the Sapphire Staff of Moses, are both found, that’s just the beginning of the quest that will have you speed-reading through the book to discover where the clues lead Leah and Gareth.

With just enough historical and biblical facts to back up the story, mixed with some really neat suppositions made, and proven, by the characters, the author has done a fantastic job of creating a believable, yet nail-biting adventure. Like the first book in the series, 13, the dialogue between characters, particularly Leah and Gareth, are one of the things that puts this book miles above others in this genre. It flows so naturally, and the banter between Leah and Gareth, a pair who have an odd love/hate/can’t-take-my-hands-off-you relationship, is so spot on and entertaining. At times they fight, other times they work in concert to solve the mystery at hand, and then there are the times when they, well…sizzle. It all fits together so perfectly and both Leah and Gareth come to life. And the best part? Just when we think all is resolved, the author gives us a peek at the next adventure. Stay tuned…

Quill says: Full of mystery, wrapped up in just enough historical fact to make it all seem so real, and with plenty of sizzle between the two main characters, The Sapphire Storm is a definite winner!