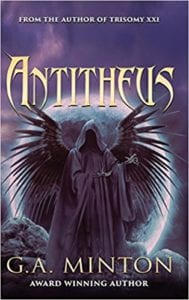 Harken back to Stephen King’s now-famous characters who were trapped in a huge hotel with a blizzard raging outside (while the demons raged within), and throw in some of the debates regarding right vs. wrong that Dan Brown focused upon in his now-famous tale, and you will create a mixture from where this incredible book could have been born.

Now, we’re not talking the Overlook Hotel here. We are talking about an isolated place set high up in the Sierra Nevada Mountains, where a hotel was built by a mining company back in the early 1900’s. A mine sits nearby where coal was being excavated when a vein of gold was unearthed. Once the gold was gone, the mining company closed up shop and abandoned the place. A man named Zeke Reinhart, along with his now deceased wife, purchased the inn, took out a huge loan to remodel the place, and renamed it The Goldmine Lodge. They even re-opened the mine and offered free tours. Zeke and Greta turned their venture into a success, but once Greta passed on, Zeke noticed that everything else was dying off as well.

When the tale begins, the only visitors at the Lodge are a group of religious leaders calling themselves "The Shepherds of God." From various faiths, these people are holding their annual conference; setting their differences aside, they’re working to find ways to get more young people involved in religion. Unfortunately for this group, there is a true evil at play that wants to stop their good works.

As Zeke sees the thunderheads amass and knows that a blizzard is taking shape, he doesn’t expect to also go into one of the hotel’s rooms to find a virtual massacre of one of the Shepherds, with a note left on the wall over the corpse reading: They All Lose Heart. Zeke immediately calls the Sheriff who is a ways away and lets him know what has happened. The Sheriff says to lock the dead man’s room; he will be starting towards the location immediately, hoping to beat incoming snow.

Trying not to scare the other Shepherds, Zeke does his best to break the news calmly and not tell them what the room looks like and the horrific act that took place there. He tells them that the law is on the way and then suggests they take a tour of the mine, perhaps to get their thoughts off the tragedy that has just occurred. It doesn’t take long, however, before another horror occurs, another note is found, and another step on a journey that will bring fear to the reader, as well as the cast of characters, is taken. From the priest to the rabbi to even a nun who just happens to have some frightening reading material with her on the trip, readers will be amazed at the twists and turns this story takes before it comes to a thrilling conclusion.

To say this is simply one of those good vs. evil battles would really not do this tale justice; it’s too well-written. The author has made sure that every character has that touch of evil. Even Zeke’s own dog, Rip, is descended from Nazi killer guard dogs. Minton has made sure no stone was left unturned.

Quill says: If you want that great horror story that’s intelligent and frightens you to death, this is the book for you!